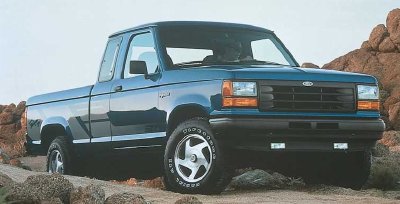 Ford celebrated its 75th anniversary of making trucks during 1992, a year that also brought a redesign of the full-size Econoline vans. These vehicles had not seen major changes since 1975, so it was a welcome modernization.

The 1992 Ford Ranger's STX package came with side graphics, as shown on this SuperCab 4x4.

1992 Ford Ranger Sport models got their own distinct -- and colorful -- graphics.

The Flareside bed returned as an option in 1992 after a four-year absence. It was available on both regular- and extended-cab models of F-Series pickup trucks.

The full-size Bronco received the same new front-end treatment as the Ford F-Series trucks, and also added a Nite trim package similar to that introduced on F-Series trucks the previous year.

Ford F-Series pickups were also treated to a front-end restyle for 1992 that resulted in a smoother face.

Two unusual Ford concept trucks were briefly introduced in 1993, but never mass produced. See them here when you continue to the next page.