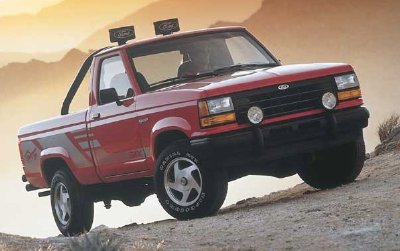 Toward the end of the 1990 model year, Ford released a new sport-utility vehicle called the Explorer. It was labeled a 1991 model and would quickly become the best-selling SUV in the U.S. -- a title it has garnered every year since. But it spelled the end of the smaller two-door Bronco II, which had amassed its own devoted following with its tidy size and reasonable fuel efficiency.

Two-wheel-drive Rangers got an optional 3.0-liter V-6 engine for 1991 to replace the 2.9-liter offered previously (and still optional on 4x4s), gaining five horsepower in the bargain, to 145. Dress-up option packages included the STX, as shown here.

Another decor package option for the 1991 Ranger was the Sport, as shown above.

The optional Ford Ranger 4.0-liter V-6 could now be linked to a five-speed manual in addition to a four-speed automatic. Regular and SuperCab (shown above) body styles remained available.

Introduced in the spring of 1990 as a '91 model, the Explorer looked quite similar to the Bronco II it replaced. But while the Bronco II came only in a two-door version, the Explorer was offered with either two or four doors. Both were significantly larger than the Bronco II -- the two-door by more than a foot, the four-door by nearly two feet. The only engine offered was the Ranger's 155-horsepower 4.0-liter V-6, which helped provide a 5500-lb towing capacity.

New for 1991's Ford F-150s was a Nite trim package that included blackout exterior trim and alloy wheels with white-lettered tires. It was offered on both regular and SuperCab models.

New graphics and style options for several tried-and-true Ford truck lines arrived in 1992. Click to the next page to see the results.

A colossal hit right out of the box, Ford's Explorer sport-utility vehicle would go on to become one of the company's most important products. It came in two- and four-door body styles (the four-door proving far more popular), and both versions were somewhat larger than their direct competitors.

Explorer's combination of passenger and cargo room, maneuverable size, adequate power, and features for the money -- along with overwhelmingly favorable magazine reviews -- made it America's best-selling SUV in its very first model year on the market. And it has continued to hold that title every year since.