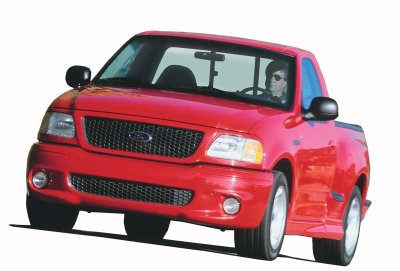 Midway through the 1998 model year, Ford finally introduced new heavy-duty F-Series pickup trucks based on the redesigned light-duty versions that had appeared for 1997. Tagged as 1999 Ford truck models, the F-250 HD and F-350 carried a similar but brawnier look, befitting their load-lugging status. Also arriving as a 1999 model was a revised Windstar minivan with dual sliding side doors.

Returning in 1999 after a three-year hiatus was the high-performance Lightning truck, and it returned with a vengeance. Again based on the Ford F-150, it now carried an exclusive supercharged version of the 5.4-liter V-8 packing a mighty 360 horsepower. As before, a lowered sport suspension and special trim was included in the package.

Ford F-250 Heavy Duty and F-350 had lost out when the lighter-duty F-Series models were redesigned for 1997, but these trucks made up for it with a redesign of their own for 1999. Now called Super Duty, they arrived early in the 1998 calendar year, and like their lighter-duty linemates, offered a SuperCab with dual rear-hinged back doors. Styling touches included grilles incorporating vertical "nostrils" at each edge.

New for SuperCab versions of the F-150 were dual rear doors; previously, only the passenger side had a rear door. Other changes for 1999 included a revised grille and 25 more horsepower for the available 5.4-liter V-8, now with 26

In 1999, the Ford Super Duty line included even heavier-duty F-450 and F-550 truck models that could be fitted with a variety of bed styles.

With the addition or redesign of several important vehicles and the deletion of its long-standing heavy-duty truck lines, it can never be said that Ford didn't close out the 20th century with a bang. In combination, these changes helped position the company for the next century -- and its second hundred years.