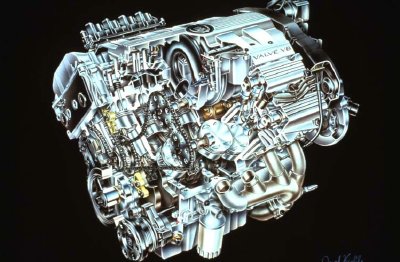 Changes to the 1993 Cadillac line demonstrated that GM was repositioning Cadillac as its technology leader, an attempt to win back an image that had traditionally blended mechanical sophistication with luxury and prestige.

Every 1993 Cadillac, for example, got as standard steering and suspension that both firmed up as vehicle speed increased. This was designed to provide a confident, roadworthy feel while still providing light steering and a soft ride in around-town driving.

Those features in fact had been pioneered by the ill-starred Cadillac Allante, which had reached the end of its life, and would not return after model-year 1993. The last Allante was unquestionably the best, however. Credit a brilliant new Cadillac V-8 for that.

Called "Northstar," this new V-8 boasted dual overhead camshafts, four valves per cylinder, all-aluminum construction, and state-of-the-art engineering throughout. Though sized at only 4.6 liters, it belted out 295 horsepower.

The 1993 Cadillac Allante also boasted a more-sophisticated traction-control system and a faster-acting "Road Sensing Suspension" (RSS). But by this point, the impressive 1993 Cadillac Seville and 1993 Cadillac Eldorado, both of which had been redesigned for 1992, were bringing in far more customers than the two-seat Allante ever had.

The Cadillac Eldorado Touring Coupe (ETC) flew from 0 to 60 mph in just 7.5 seconds.

Their iron-head pushrod 4.9-liter V-8 gave way to the sterling new Northstar V-8. As in the last Allantes, the new engine packed a 295-horsepower punch that produced 0-60 mph times of around 7.5 seconds in Consumer Guide testing, more than a second quicker than before.

Arriving for the base 1993 Cadillac Eldorado was a $3,000 Sport Coupe package with a special 270-horsepower Northstar V-8 tuned for extra torque (300 pound-feet versus 290) at lower rpm, all the better for low-speed lugging power. An alternative Sport Appearance option for the base 1993 Cadillac Eldorado offered ETC-type interior and exterior appearance for just $875.

Every 1993 Cadillac Eldorado and 1993 Cadillac Seville benefited from standard passenger-side airbags, minor rear-suspension tweaks, and improved traction control that would throttle back on engine power as well as apply the brakes to keep you on the straight and narrow.

On the next page, we'll look at an important makeover for 1994.