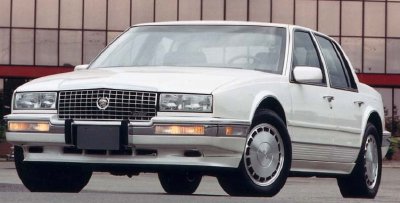 The 1990 Cadillac lineup featured various upgrades to existing models, all of which were designs held over from the mid- to late-1980s.

A driver-side airbag was newly standard, as were some minor accessories that had been options. Performance of Cadillac's front-wheel-drive coupes and sedans (Seville, Eldorado, DeVille and Fleetwood) benefited by a switch from single-point to multipoint fuel injection that took their 4.5-liter V-8 from 155 to 180 horsepower and improved torque by five pound-feet to 245 total.

The extra horsepower was welcome, especially for the 1990 Cadillac Seville and its coupe cousin, the 1990 Cadillac Eldorado. Cadillac was increasingly pitching these cars as performance-oriented rivals to import-brand sports sedans.

Cadillac had some luck in that arena with the Touring Sedan version of the Seville. This featured a discreet monochrome exterior, beefy tires on handsome alloy wheels, firmed-up Touring Suspension, and a shorter final-drive for quicker acceleration. The Seville Touring Sedan package proved popular enough to rate separate-model status as the 1990 Cadillac STS, and added standard antilock brakes (ABS) to boot.

High-tech touches like a standard traction-control system were introduced with the 1990 Cadillac Allante.

The 1990 Cadillac Allante, Cadillac's two-seat luxury convertible, was given several high-tech features intended to spruce up image and sales.

Heading the list of changes to the 1990 Cadillac Allante was a standard traction-control system, a first for a front-wheel-drive car, plus a revised "Speed Sensitive Suspension." The latter now stayed in its "soft" mode up to 40 mph, instead of 25 mph, for a smoother low-speed ride; as before, it then selected "normal," going into "firm" only above 60 mph. "Firm" also kicked in automatically during hard acceleration, braking, or cornering.

Also, the 1990 Cadillac Allante now came with a driver-side airbag, and a compact disc player lengthened the standard-equipment list.

Straining to keep price attractive, Cadillac now offered a second 1990 Cadillac Allante model, this one without the previously standard removable hardtop. Price was $51,500, an eye-opening $6,313 below the "full" version, which was hiked to $57,813.

Despite this, and the arrival of a pricey redesigned version of the car Allante was supposed match in quality and prestige, the Mercedes-Benz SL (which started in the mid-$70,000s), Allante sales only got worse. Model-year output for the 1990 Cadillac Allante eased to 3,101 units, from 3,296 in 1989.

Cadillac plowed ahead with several significant changes to its 1991 and 1992 models. Learn about these on the next page.