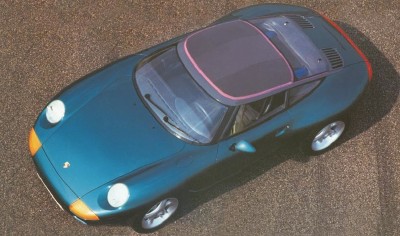 The 1989 Porsche Panamericana concept car styling was groundbreaking, but also harked back to tradition.

The 1989 Porsche Panamericana concept car styling, according to the company, was meant to serve as a reminder of the renowned Carrera Panamericana, the legendary endurance road race of the early 1950s. A demanding and harrowing trek through Mexico, the annual race featured cars that had to be "as fast on asphalt as on a loose surface."

One such entrant was Porsche's 550 Spyder, which gained international fame as a result of its distinguished competition in Mexico in the 1953 and 1954 events. That twin-cam Spyder engine went into Porsche sports-racing models in 1954, carrying the Carrera designation as a mark of the car's racing origin.

The Porsche Panamericana concept car design was a clear evolution of the traditional 911 shape, but added a vibrant personality of its own to suggest the future of that classic profile.

A nearly straight, flat tapered line reached from the windshield to the end of the rear deck, above sharply tapered quarter windows, to form a fastback profile that really looked fast.

If you stood back, squinted your eyes a bit, you could discern elements of other modern Porsches in its makeup. The shape of the front end, for instance, wasn't so far removed from that of Porsche's 959 supercar.

Viewed from the rear, with a full-width red panel joining the wraparound taillamps, there was a touch of 928. A shapely oval exhaust outlet was built into the back panel. Heavy-looking six-spoke wheels displayed an over-and-under design, and carried the oversize tires that were expected on a car of this caliber.

Mechanically, the Porsche Panamericana concept car was based on the production all-wheel-drive Porsche Carrera 4, introduced in 1989. Their kinship ended at the body skin, which in this case was carbon fiber and glass rather than the customary metal.

The 1989 Porsche Panamericana concept car shared traits with Porsches past in other ways as well. Read more about these similarities on the next page.