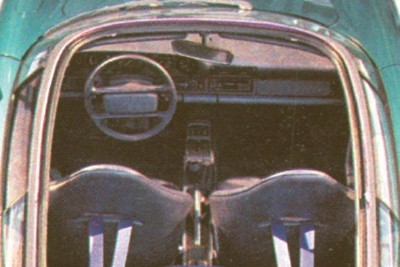 The fastback top of the 1989 Porsche Panamericana concept car was transparent and removable.
©2007 Publications International, Ltd.

The 1989 Porsche Panamericana concept car body design stunned the auto world. This wasn't surprising: Virtually every Porsche produced since 1948 stood above the crowd. Yet the Panamericana was unlike any Porsche on the street.

The 1989 Porsche Panamericana concept car body design was an amalgamation of striking curves, cut by the occasional sharp edge.

What stood out from the very first adoring glance, though, was the car's low and completely transparent top. Apart from a narrow structural band around the perimeter that led into the rear engine access cover, it was all glass above the driver and single passenger. And if that wasn't enough openness, both the roof and rear window slipped off for open-air motoring.

Moving down from the clear top, the next styling touches to strike the eye were the startling open wheel arches. Massive cutouts in the body's contour completely exposed both the front and rear wheels, with plenty of open space ahead of and behind each tire.

The front arch reached over the wheel to form a sharp crease that faded away as it entered the door panel. Farther back on the door began yet another assertive crease. That one flowed backward to form a jutting bulge above the back wheel, before curving serenely into the rear panel.

The Porsche Panamericana concept car's imaginative design worked through a mix of fantasy and freedom, stretching beyond the normal confines imposed by "legislative limits." More than one observer at the Frankfurt debut commented on the car's similarity to a dune buggy. Could be, but if so, it was a dune buggy with more power than the typical desert racer would ever expect.

For more on the 1989 Porsche Panamericana concept car styling, go to the next page.