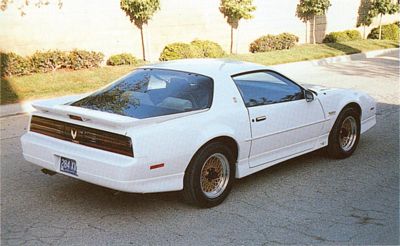 Never was the Firebird more powerful or more refined than in 1989, when the company unleashed its 20th Anniversary Trans Am. See more Pontiac Firebird pictures.
©2007 Publications International, Ltd.

Attempting to thwart the thieves who'd virtually declared war on Firebirds (and Camaros), GM installed a "pass key" deterrent system in all '89 models, following the lead of the GTA. A resistor pellet imbedded in the key had to match coding in the ignition lock, or the starter would be temporarily disabled. But that was a tame new feature compared to most on the 1989 Pontiac Firebird 20th Anniversary Trans Am.

High-performance coupes halted with four-wheel disc brakes. Formula and Trans Am Firebirds gained standard air conditioning. GTA tires now were "Z" rated (good for over 149 mph) instead of "V" rated (130 mph); but size was unchanged, at 245/50R16. Once again, the GTA came in hatchback or notchback form, the latter actually a $700 option. A compact-disc player also became optional.

The Trans Am celebrated its 20th anniversary in 1989, and Pontiac responded with a special gift to fans: an anniversary edition with a turbocharged 3.8-liter V-6 beneath the hood. Last seen powering Buick's sizzling Grand National and GNX, the 250-horse-power turbo -- cranking out an imposing 340 pounds -- feet of torque-sliced 0-60 mph acceleration times to an astounding five seconds or less. Rollicking action was back in style, so long as a customer was willing to pay $10,000 more than GTA price for the privilege. Roughly 1,500 Trans Am devotees did exactly that.

One of the most potent Trans Ams ever built, the 20th Anniversary model came only with automatic shift. No crass racing stripes marred the pure white body, adorned by nothing more than subtle "20th Anniversary" cloisonne emblems and "Turbo Trans Am" badges. A stock Anniversary edition served as pace car for the 73rd running of the Indy 500.