Four wheels do not a car make. Not always. The 1989 Plymouth Speedster concept car rode on four wheels, all right, but it was a spry little mix of motorcycle and automobile.

Pondering how it might be possible to climb inside the Speedster, which lacks opening doors, no one would be surprised to learn that it was aimed clearly at the 18 to 25 year-olds so prized by the marketing mavens. Demographers and marketers love the under-25s, calculating that young people have loads of surplus cash, with which they are eager to purchase products of every kind.

Naturally, one of those products was an automobile. So just about every automaker (except for those who specialized in luxury vehicles) struggled to appeal to the elusive tastes of the youngest drivers.

Fun and frolic, surf and swim. According to the 1980s analysts, that's how young people utilized their free time. And that was the basic theme of the Plymouth Speedster concept car, which, had it become a production model, would have been expected to carry laughing loads of teens and young adults to beaches and ocean vistas.

One trade paper described the Speedster as "whimsical." Some might brand it frivolous. Yet who could say what kind of narrow market niches might emerge as the future gets underway?

Pontiac tried a similar approach with its Stinger. Both concept vehicles made the rounds of the auto-show circuit during 1989. Maybe both companies had finally found the car they needed to draw young folks to their more pedestrian wares, even if this pair never dropped off the end of an assembly line.

For information on the design of the Plymouth Speedster concept car, go to the next page. 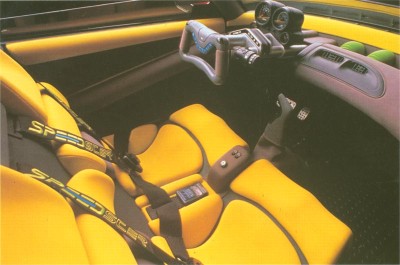 Not surprisingly, there wasn't much about the 1989 Plymouth Speedster concept car design that could be called conventional. If you expected an ordinary round steering wheel, for instance, you'd be in for a surprise. The little funster was supposed to serve as a merging of high-performance motorcycle with open sports car, so it had more of the feel of a two-wheeler than might be imagined.

All the major controls and instruments were mounted on a movable, rectangular steering control fork. Instruments could have come off a motorcycle instead of an automobile. Driver and passenger seats were in fixed positions, but the foot controls moved forward and backward to suit drivers of different physiques. Front fenders and hood combined to form a motorcycle-type fairing that wrapped around the front, reaching all the way to the doors. As well, this car did not incorporate ordinary headlights: Contained within that fairing were pop-up upper and fixed lower light bars.

The low wraparound windscreen was like a cross between a motorcycle's air deflector and a downsize roadster windshield. The Plymouth Speedster concept car's gray two-seat body was actually a simple molded plastic tub, with a lighter-gray roll bar for safety's sake. It almost looked ready to float out to sea, like the old Amphicar of the 1960s.

The wedge-shaped profile was led by a rounded nose, with near-ground level rocker panels that looked almost like old-time running boards. Splashes of color were added by bright green wheels that looked like they could have come off a performance motorcycle.

The exhaust pipes also appeared to have a motorcycle pedigree, and the front turn signals formed an integrated assembly with the car's mirrors.

There was no need to worry about keeping the Speedster clean and tidy. When the molded plastic interior grew grimy with the deleterious effects of leftover hamburger wrappers and other byproducts of the youthful Good Life, cleanup was a breeze. All you had to do was sweep out the big stuff and hose away the rest.

The fixed seating surfaces were upholstered with removable foam pads, covered in unique neoprene "wet suit" material; nobody had to bother changing from swimwear to motoring togs -- you just plopped your dripping bod down on the seats and drove off, letting the sea air and sun handle the drying-off chore. Lots more fun that way, anyway.

Indeed, fun was what the Speedster was all about. To learn more about how the designers tried to make the Plymouth Speedster concept car more fun, and how they developed the car, go to the next page. 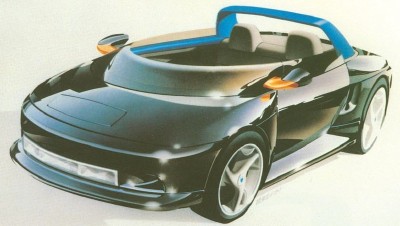 A molded plastic tub formed the 1989 Plymouth Speedster concept car's boatlike body, inspiring notions of hopping in the car for a trip to the beach.
©2007 Publications International, Ltd.

Chrysler Pacifica, the corporation's design studio in Carlsbad, California, handled the styling assignment. Two major goals were set: The car had to appeal strongly to those favored 18 to 25ers, and it had to be light in weight. No one had to make any plans for likely -- or even possible -- production on a real assembly line.

Old fogies over age 25 were sure to spot one unpleasant drawback right off the bat. The Plymouth Speedster concept car didn't just happen to have its top in the down position. It happened to have no top at all. When it rained, you get wet. When dust storms appeared, you grow dusty. Sudden snowflakes became part of the wild and wacky motoring experience.

In short, you got most of the disadvantages of a motorcycle, but probably not too many of its benefits, such as heart-stopping acceleration. In fact, 1989 Plymouth Speedster concept car had no engine at all. It was merely a steel-and-plastic styling mockup.

Appearing at 1989 auto shows along with Plymouth's cycle/car were two other notable Chrysler concept vehicles: Dodge's super-powered V-10 Viper, which was a preview of the production muscle roadster, and Chrysler's safety-oriented Millennium sedan, which previewed the production 1993 Dodge Intrepid and Chrysler Concorde sedans.

What did the Plymouth Speedster concept car hint of? Just plain fun, it seemed. And it was hard to find anything wrong with that, even if one couldn't quite picture themselves grappling with that quasi-motorcycle steering fork.

Check out the specifications of the Plymouth Speedster concept car on the next page.

The 1989 Plymouth Speedster concept car hoped to interest 18-25 year-olds. Neither the Speedster, nor the Plymouth brand, had any real future.
©2007 Publications International, Ltd.

NOTE: The Speedster was a design exercise with no engine.