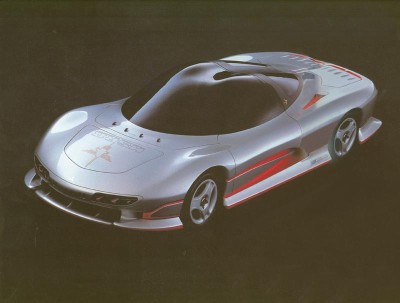 The 1989 Mitsubishi HSR concept car seemed to emerge from the vision of science-fiction writers who concocted a future of bubble-topped vehicles traveling 200 mph on super-safe superhighways.

Families, these writers predicted, would pop into a car that looked like a spaceship, and head for destinations hundreds of miles away at velocities approaching those of 20th century airplanes.

Maybe drivers would still be guiding their cars themselves; or maybe they would follow a guideline embedded in the road, aided by radar, with little human intervention. Either way, they'd expect to journey long distances without fretting much about such mundane irritants as flat tires, boiled-over engines, or semitrailers suddenly roaring out from the car's blind spot.

As the 1990s dawned, Mitsubishi's High Speed Research concept vehicle tried to suggest that a future of 200-mph speed limits supported by suitable cars and highways, might not lie so far ahead.

It was no secret that Japan had led the race into electronic-assisted technology for automobiles. Mitsubishi billed its concept car as an "unprecedented union of advanced technology, efficient power and fluid, aerodynamic design." The ultimate goal, they said, was to enable average drivers to "travel long distances quickly and confidently."

Mitsubishi HSR concept car development proceeded from the basic assumption that the "needs of ordinary motorists will soon outstrip the capabilities of current automobiles."

Mitsubishi chose to respond by creating a vehicle that could provide "safe and predictable high-speed driving," incorporating a helpful blend of communications and navigation equipment and computer monitoring.

The body design of the Mitsubishi HSR concept car added to the futuristic feel of the vehicle. Keep reading to learn more.

Unlike many concept cars of the time, the 1989 Mitsubishi HSR concept car was fully drivable.
©2007 Publications International, Ltd.

The 1989 Mitsubishi HSR concept car body design was first seen in public at the Tokyo Motor Show, and the fully drivable car proved to be a virtual show-stopper.

Audiences at American exhibitions in 1989 cast a similarly excited eye at the bubble-topper's organic, functional shape. Near-future drivers, they learned, might be "enclosed in a reinforced, space-age skin, with expansive visibility all around." Better yet, they would revel in a "solid sense of confidence and well-being."

Aerodynamics had been the buzzword in the auto trade for several years already, so the Mitsubishi HSR concept car appeared to be the next logical step forward. Even showgoers who knew (and cared) little about a car's coefficient of drag, not to mention the coefficient's impact on high-speed stability and fuel efficiency, could imagine a vehicle like this barreling down tomorrow's open highway -- and probably without having to stop at every other gas pump along the way.

Sounded great, in theory. Onlookers might be excused for temporarily forgetting the traffic jams and crazed drivers they might have encountered on the way to the auto show. Dreams can't be bothered by such tiresome realities.

In fact, what Mitsubishi created was not quite as futuristic as it appears. Many of its elements and features weren't "maybe" devices at all, but real technological developments that were close to completion.

Several already existed in some form on contemporary cars. A number of HSR's powertrain and suspension components, in fact, were shared with the company's Galant and Eclipse models.

Mitsubishi's Eclipse coupe, for instance -- built at the new Diamond-Star plant in Illinois -- benefited from the same research that produced the HSR. According to the company, the Eclipse gained a startlingly low drag coefficient of 0.294, along with the lowest frontal-lift coefficient of any production car.

Drag coefficient of the Mitsubishi HSR concept car itself dropped to an unheard-of figure of 0.2, an amount more appropriate in an airplane than a road vehicle. Moreover, the flowing form created a useful down-force that increased road-hugging capabilities at high speeds. It actually held tighter as speed rose, maneuvering as precisely at 200 miles an hour as at more modest velocities.

Part of the HSR concept car's appeal was the fact that many of its features existed in some form on Mitsubishi production models, such as the Eclipse.
©2007 Publications International, Ltd.

Though Mitsubishi's design wowed onlookers, it was Mitsubishi's specialty -- technology -- which really shined in the 1989 Mitsubishi HSR concept car. Go to the next page to learn more about the design and technology of the HSR. 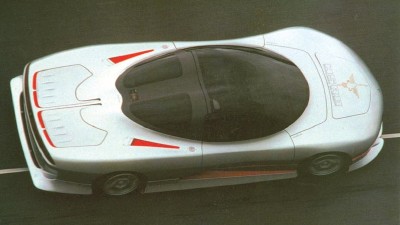 The 1989 Mitsubishi HSR concept car technology was evident in the car's appearance. A Nazca hummingbird -- as pictured in lines cut into the Peruvian plateaus -- served as the initial abstract image for the HSR's shape.

The lines in that image were supposed to represent the linkage between the vehicle's systems, as they reflected the "speed, grace and mobility of the hummingbird" itself. The curved form was also intended to portray the motion of an ocean wave.

The circular glass bubble-top sat atop a luscious collection of curves and protrusions. Ground-effects-type spoilers, practically running-board size, wrapped almost completely around the vehicle, and were punctuated only by a sizable notch at the front. The rear spoiler appeared to glide right off the deck. Ground clearance was so snug that the body appeared to fall perilously close to dragging on the pavement.

Technology was by no means limited to the car's powertrain and aerodynamic aggressiveness. The Mitsubishi HSR concept car contained a futuristic system for communications and navigation, as well as computerized monitoring of its functions.

With Mitsubishi a technical leader in electronics, it was no surprise the cockpit
©2007 Publications International, Ltd.

A space-age complement of optical gyro fibers, cathode-ray tubes, and other electronic devices let you (and your navigator) pinpoint where you were located on a map, set and follow a desired route, gather traffic information along the way, and communicate with other vehicles or along-the-road stations. Mitsubishi claimed its system came close to what might be found on an aircraft's instrument panel.

The "super-intelligent" overall Operating Control System (OCS) offered assistance and advice related to the actual running, steering, and braking of the Mitsubishi HSR concept car. A "g" sensor and other gadgets sent facts to the multi-purpose central computer. Quickly digesting that information, the microchips spit out instructions or a summary of what was happening at every step of the trip.

Mike Nash, Vice-President of Marketing Services, said the system was designed to assist owners "with average driving skills to both safely and comfortably sustain cruising speeds in a diverse range of driving environments."

A rear-view video monitor was just one of the many near-future-think gadgets inside the
©2007 Publications International, Ltd.

But was the average driver really capable of handling such a powerful machine? Mitsubishi thought so, and designed the Mitsubishi HSR concept car with this in mind. Learn more about this on the next page.

The 1989 Mitsubishi HSR concept car mechanical design kept the skills of the average driver in mind. Perhaps this was the rationale for the less-than-fanciful, though certainly not low-tech, powertrain. The HSR sported a 2.0-liter, double-overhead-cam 4-cylinder engine that transmitted its power to an all-wheel drive system.

A combination of strength and light weight was considered the secret to any future-car's performance. For that reason, the HSR wore a body made of Kevlar and polycarbonate.

Independent suspension at all four wheels was electronically-controlled, able to adjust automatically in response to changing road conditions. Such systems were beginning to appear in one form or another on a number of contemporary luxury and performance automobiles.

Antilock braking was standard, along with a supplementary hydraulic air brake. Nothing too shocking in any of that list -- just a harmonious mix of what already existed.

Dream-car designers of the past didn't always focus much on safety. Or efficiency. Flashy bodies and super-powered V-8s under the hood were enough to set new-car customers to salivating. Not by the late 1980s, however. Future motorists would still crave performance, but automakers were discovering that safety was likely to become a primary selling point.

It was true, the highway system wasn't yet ready for a real-life descendant of the Mitsubishi HSR concept car. But few drivers, for that matter, were likely to be capable of handling speeds beyond 200 miles an hour, regardless of Mitsubishi's claims of aiming toward the motorist of "average" skill.

Nevertheless, the dream of swift, near-silent cross-country travel -- whizzing from Chicago to Los Angeles in a matter of hours rather than days -- had never faded from the minds of automotive designers and futurists.

The HSR hugged the ground tighter as speed increased with the help of flaps that raised automatically to provide stabilizing downforce.
©2007 Publications International, Ltd.

Meanwhile, the lessons learned on futuristic vehicles like the Mitsubishi HSR concept car were applied to the cars that entered the real-world marketplace each year. Even if none of us live long enough to see a world of bubble-tops blurring across the landscape, we surely will all benefit from the advances today's engineers devise for tomorrow's dream cars.

On the following page you will find 1989 Mitsubishi HSR concept car specifications. 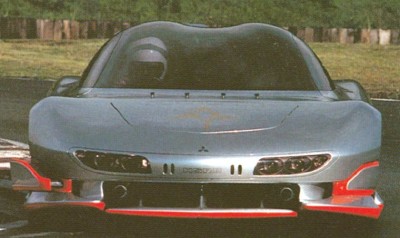 Unlike many show cars, the 1989 Mitsubishi HSR concept car arrived at the auto shows ready to perform. How does 200 mph sound?
©2007 Publications International, Ltd.