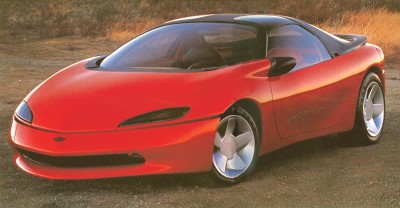 The 1989 Chevrolet California IROC Camaro concept car development incorporated practical, as well as visionary, ideas. For example, there was not much chance that the future Camaro would give up its traditional rear-wheel drive. Anti-lock braking, evident in the show car, would likely appear on a production Camaro as well, since it was fast gaining popularity with motorists, and insurance companies alike, as a "must have" safety feature.

Following early directions from GM's design chief, Charles Jordan, a 50-person team handled the creative duties in California to make this "tomorrow" Chevrolet California IROC Camaro a potential reality. Amazingly, they went from a scale model to a full-size metal prototype in just six months. Yes, that's a metal body, not fiberglass or composite -- quite a surprise for such a shapely form, created in so little time.

Even if it had no other virtues, the car would demonstrate what can be accomplished using ordinary rather than exotic construction materials. Out of a half-dozen reduced-size, clay models, the California design team chose one body style and sent it to a California prototype builder to be turned into sheet metal.

Observers wondered whether this roundish, nearly roly-poly shape could actually be the next F-body Camaro. A lot of experts, inside and outside of Chevrolet, thought so. Or more likely, they believed that certain parts of the overall design could have found themselves on the production Camaro of 1992 or 1993. That would have put an all-new Camaro for the 1990s onto the market just in time for the marque's 25th anniversary.

Few doubted that the Chevrolet California IROC Camaro concept car would, at the very least, influence the ultimate design, even if most of the individual elements disappeared in the process -- giving way to conventionality and practicality.

Most believed that details such as the pointy nose, for instance, or the non-traditional doors, might fade away sometime during the race toward the marketplace.

Nevertheless, neither the California nor the related Pontiac Banshee were likely to be consigned to the dustbin when the time came for a final rendering of the next generation 2+2 coupe.

Check out the next page for specifications of the Chevrolet California IROC Camaro concept car.