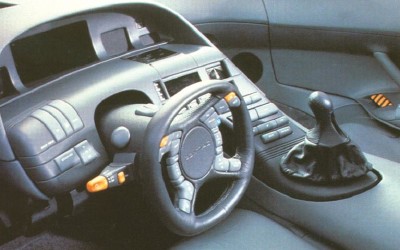 A head-up instrument display (HUD) projected a holographic image ahead of the windshield, so the driver could check speed, fuel level, turn signals, and the like without looking down at the dash. The HUD appeared to float at the front edge of the hood, just below the horizon line, visible in the driver's peripheral vision.

Projected below the HUD information was a virtual image display (VID) that showed an optically-enlarged 3-D portrayal of the Pontiac Banshee concept car's analog cluster (speedometer, oil pressure, temperature, voltage). This one appeared to lie just a little closer than the HUD. Closer yet was an image of the shift indicator and rear-view monitor. These in-the-windshield images were optical tricks, of course, since the instruments themselves were inside the car.

Wraparound front seats had a center pivot, and differed from the ones on which we normally park our posteriors. The contoured lower portions hooked onto the floor and console, in the normal manner. Swing-away backs had a cantilever-type hookup to another portion of the console, and didn't appear to be fixed in place at all. Well, you probably had to sit in them to get the full picture.

The unusually busy steering wheel of the Banshee was jam-packed with buttons.
©2007 Publications International, Ltd.

Seats adjusted only up and down, but pedals and steering wheel completed the personalization. Set the memory switches for your favorite position and the steering wheel, pedals, and seat pulled themselves into perfect alignment.

But technology was not limited to smart seats and steering columns on the 1988 Pontiac Banshee concept car. Learn more on the next page.