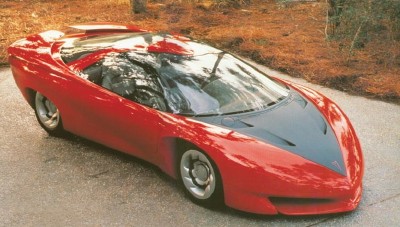 After the debut of the 1988 Pontiac Banshee concept car at the 1988 auto shows, many automotive pundits believed what they were seeing was the next generation Pontiac Firebird.

No concept vehicle ever goes from display stand to assembly line intact, of course. But sizable elements of the Banshee's shape, particularly the front fascia and tail treatment, did show up over the years on the 1993-2002 generation Pontiac Firebird.

Like all concept cars, part of the the 1988 Pontiac Banshee concept car's purpose was to enhance its creator's image. In Pontiac's case, that meant "sporty, fun-to-drive personal transportation." At the same time, it let the company toss out styling ideas in three-dimensional form, then listen to public reaction before committing to a real-life design.

Pontiac admitted Banshee's test-bed role from the beginning, noting that it was a "futuristic performance coupe with realistic design and engineering features that could appear in the next generation of the popular Firebird."

Sure enough, a close look revealed nearly all the expected Pontiac styling cues, albeit in futuristic dress. The familiar Pontiac front-end vee-motif, for example, took on gigantic form, serving as the centerpiece for the hood.

The the 1988 Pontiac Banshee concept car's gaping mouth, created by the presence of a "floating wing" near ground level, looked ready to suck up all the available air anywhere near its path, after the sharp nose sliced its way through the atmosphere.

In tandem with the outboard aero sponsons, the front end displayed a fresh interpretation of the traditional Pontiac split-grille formation. The movable wing had a function, too, altering the airflow into the cooling system.

For more on the design of the Pontiac Banshee concept car, go to the next page.