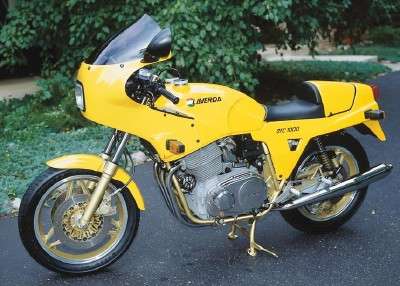 The 1988 Laverda SFC 1000 motorcycle was another major step in the evolution of a company that began a century earlier by building farm implements.

Laverda's first motorcycle was a small, single-cylinder bike produced in the postwar era to test the waters of the market. It proved a raging success, and thus began the company's foray into motorcycle manufacturing.

At first, single-cylinder bikes were all Laverda produced. Then, in the late 1960s, the company ventured a vertical twin, considered quite a risk at the time. It wasn't until 1972 that triples were offered, and it is these three-cylinder engines for which Laverda is best known in the United States.

At first, the three-cylinder engines were fitted with single-plane (360-degree) crankshafts that produced uneven firing intervals and an ungainly exhaust note.

The 1988 Laverda SFC 1000 sport-touring model featured in this article has a 981-cc triple, and engine that amassed an enviable record in racing over the years.

Marzocchi suspension at both ends combined a comfortable ride with capable handling, while a trio of disc brakes along with an antidive compensator fitted to the front forks ensured safe, controlled stops.

Because it was not intended for export, the 1988 Laverda SFC 1000 motorcycle is a rare sight on U.S. roads. Yet, in many respects, it was better suited to American tastes than many of the exotic machines that found their way to these shores during the 1980s.

Go to the next page for more pictures of the 1988 Laverda SFC 1000 motorcycle. 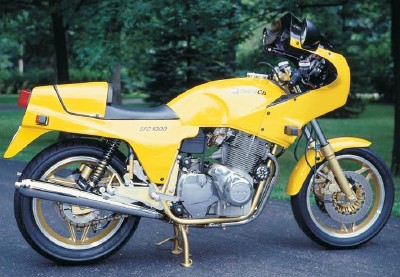 The Italian-built Laverda SFC 1000 wasn't intended for export and so is an unusual sight on American roads.

The 1988 Laverda SFC 1000 had unusal stylistic touches, such as gold-painted components and an aluminum gauge panel. The bike also featured floating disc brakes and advanced calipers.

The aluminum gauge panel is dominated by a large tachometer redlining at 8000 rpm.
Floating ventilated brake discs are gripped by Brembo calipers.
With the shift to a new crankshaft in the late 1970s, Laverda's triple gained smoothness and power.
Gold-painted frame, wheels, and suspension components added a distintive touch.