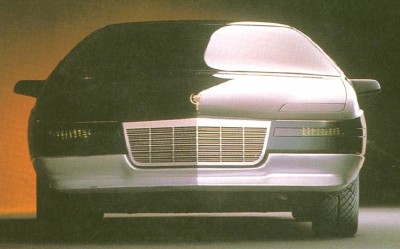 The grille of the 1988 Cadillac Voyage concept car brought back memories of Caddys past, and previewed the marque's early 21st-century look.
©2007 Publications International, Ltd.

As futuristic as the 1988 Cadillac Voyage concept car design was, fans of 1950s cars could detect more than one styling element in the Voyage skin that harked back to that era.

The tightly-knit tapered-side grille, for one, could have been mounted on a Caddy of earlier vintage without creating a stir. The black exterior paint and the sheer size of the Cadillac Voyage concept car majestically conveyed Cadillac's reputation for bulk and strength.

Matching (removable) front and rear fender skirts had never been seen on regulation Caddies, of course, but almost looked like they might have been. Taking advantage of contemporary technology, the front skirts were designed to move outward automatically when the car had to turn abruptly. They weren't stuck on just for show, but to help create an amazingly low drag coefficient (only 0.28) for such a large vehicle.

Voyage's upper greenhouse, from the base of the windshield all the way to the bottom of the tail lamps, was a single, continuous sheet of tinted glass -- that's visibility! High-intensity tail lamps and turn signal indicators weren't plain old bulbs, but then-modern-day Light Emitting Diodes. Forming a continuous strip, the rear lamps were hidden under glass; only the rear-vision video camera was visible, sending views from the back to a screen in the driver's compartment.

High-visibility automatic flashers replaced customary reflectors, to be sure oncoming traffic would see the Cadillac Voyage if it were parked at roadside during the night. After all, even a 200-mph electronically-controlled machine might break down now and then.

Windshield wipers were tucked away beneath a cover at the windshield base, rising on an elevator when needed. Both inside and outside mirrors were created to dim automatically to protect the driver from glare as bright lights approached.

The seats of the
©2007 Publications International, Ltd.

Getting into the car required no keys or locks; only the knowledge of a code for the keyless entry system. Pick the right one and the doors would open, front windows slid down a couple of inches, and seat and steering column moved aside to allow graceful entry. Back windows also tilted outward.

Shut the door to the Cadillac Voyage concept car and the seat would shift into correct position for the driver who happened to be filling its cushion -- having memorized three different settings. And if that position wasn't quite right, more than 20 pneumatic and mechanical adjustments allowed all the refinements anyone could possibly want. Mirrors adjusted themselves, too, for each driver who'd requested a setting.

For more on the design and development of the Cadillac Voyage concept car, keep reading.