The path from concept car to possible production car can take many forms, and it certainly did with the 1987 Oldsmobile Aerotech concept car.

When the fantastic original Aerotech I carried race-driving champ A.J. Foyt to record-breaking speeds in August 1987, it was more of an engineering project than a design exercise.

A year and a half later, a pair of spinoffs made their debut at the North American International Show in Detroit. Oldsmobile's goal was to apply some of the techniques used in the 267-mph single-seat Aerotech I to realistic vehicles that might carry passengers on real highways.

Aerotech II, a hybrid coupe/wagon on a lengthened GM-10 platform, looked like it belonged in the next century. Ties to the original racing model were evident in its flowing lines. The Aerotech III sedan, on the other hand, was a lot closer to earth and might well have been the forerunner of the next generation of Oldsmobile's Cutlass Supreme.

If nothing else, many of the Oldsmobile Aerotech concept car's high-tech features were expected to appear on real-life Oldsmobiles as they were perfected. Some of the electronic helpers, in fact, were merely advanced versions of gadgetry that was already being produced. The head-up driver's information display, for instance, which projects speedometer figures onto a holographic simulation that appears to float at the car's front end, was a future version of the system offered in some Cutlass Supremes. And the color visual information center was similar to the one used in contemporary Toronados. The Oldsmobile Aerotech concept car's version included advanced navigation functions, using compact discs to program map information.

The Oldsmobile Aerotech II concept car offered other features derived from the original Aerotech. Keep reading to learn about them.

The Oldsmobile Aerotech II concept car might have come as a surprise to those familiar with the single-seat Aerotech I concept car.

At first glance, the Aerotech II looked like a coupe of tomorrow that had been blended with a station wagon. In back was what looked like a gigantic spoiler. Looking closer, you realized that glass spanned the gap between the roof and the "spoiler." Indeed, the spoiler was actually the back frame for the massive glass panel that turned what was evidently a coupe into the equivalent of a station wagon.

In addition to creating an unforgettable design cue, the extended roofline of the Oldsmobile Aerotech II concept car expanded interior volume for luggage, as well as headroom for back-seat passengers.

The back compartment was easily accessible through a pair of center-hinged, tinted-glass hatches that lifted upward from each side of the car, like a pair of wings.

A continuous, unbroken line extended from the smoothly molded front bumper, up the short nose, across the huge glass windshield and into the four-foot-tall roof -- then on toward the far rear of the tail section.

Oldsmobile called the Oldsmobile Aerotech II concept car's silhouette "purposely bullet-like to pierce the wind with the least commotion." An array of low-profile quartz-halogen "mini-cube" headlamps hid behind fold-down covers during the day.

John Perkins, chief designer at Oldsmobile's Studio One, described the Aerotech II as a "sportsman's vehicle," and even a form of "shooting brake." Rear bucket seats folded to take long or bulky objects (skis, for instance) into the big rear cargo hold.

Long, flowing lines and soft curves continued inside the Aerotech II, creating an inviting space for driver and passengers. Molded dash contours extended all the way into the rear compartment, making functional surfaces accessible to all passengers. Switches and controls were flush-mounted. Lap and shoulder belts protected all four occupants, while the front pair got air bags.

The low-profile steering wheel tilted electrically out of the way for easy entry into the car, then returned to a preset position -- signaled by computerized memory -- at the touch of a button. Radio and climate-control switches were built into the steering wheel. In addition to the head-up instrument display up front, a ceiling-mounted holographic device projected a red three-dimensional warning onto the rear glass panel whenever brakes were applied.

Although the prototype Aerotech II wasn't drivable, it was created to hold a supercharged version of the original's 2.3-liter Quad 4 engine, rated 230 horsepower and feeding an automatic transmission. Electronic traction control eliminated wheel spin on slippery surfaces, while anti-lock brakes did similar duty when stopping.

Other than mini-cube headlamps, the Oldsmobile Aerotech III concept car was the image of the coming 1988 Olds Cutlass Supreme.
©2007 Publications International, Ltd.

The Oldsmobile Aerotech III concept car was a mildly disguised version of the 1988 Oldsmobile Cutlass Supreme then headed for showrooms. The nose was low, the tail high, and triple horizontal bodyside ribbing wrapped around the front and rear of the car, but faded away toward the center, at the doors.

A functional front air dam and a lumpy aerofoil on the stubby rear deck helped cut down on aerodynamic lift and drag forces. Up front were experimental "mini-cube" headlamps. And hugging the ground were low-profile tires on 17-inch aluminum wheels.

Reclining bucket seats carried all four Oldsmobile Aerotech III concept car passengers in comfort, with air bags protecting those in front. A sliding security shelf gave clearance for reclining the rear buckets, while at the same time allowing access to the trunk.

Added storage space came from a center console that ran the full length of the interior. A power tilt system automatically moved the steering wheel aside as you entered or departed, and it returned to a memorized position at a button's touch. For ease of use, radio and climate-control switches resided in the steering wheel hub.

Similar to the coupe/wagon, the Oldsmobile Aerotech III concept car had a head-up display that projected vital operating information into the driver's line of sight. The electronics however, went a giant step further, with a sophisticated rear-obstacle detection system.

A compact rear-facing radar unit monitored the area immediately behind the car, giving audible and visual warnings whenever the car approached a fixed obstacle.

Tentative powerplant for the Aerotech III was the same as the II's, namely a supercharged Quad 4; but a 5-speed manual gearbox replaced the automatic transmission used in the Aerotech II.

Both the Aerotech II and Aerotech III evolved from the original, record-breaking Aerotech. Learn more about the original model and its evolution next.

The 1987 Oldsmobile Aerotech I concept car development process owed much to Bill Porterfield, the General Motors engineer in charge of the original Aerotech high-speed project.

The engine of the Aerotech I was producing about 850 horsepower when A.J. Foyt set the record pace at Fort Stockton Test Center in Texas. Two versions were built: a long tail (LT) with twin turbos, and a short tail (ST) that ran a single turbocharger. The LT reached a peak of 278 miles per hour in one direction, 257 the other way, for an official average of 267.399 mph in the "flying mile."

The Oldsmobile Aerotech concept car could run through the quarter-mile trap in around 8.1 seconds, reaching 181 miles an hour. Chief engineer Ted Louckes noted that Aerotech I was designed around the Quad 4 engine, to demonstrate its capability "in an extreme testing environment" -- and no one could deny that 267 miles an hour was extreme.

The Long Tail version of the Aerotech I set the 267-mph flying mile speed record in Texas.
©2007 Publications International, Ltd.

Aerotech wasn't a single-company production. A large number of subcontractors were employed for the record-setting Aerotech I project, including one that provided the cockpit's Lexan cover.

A carbon-fiber body sat upon a specially-designed ground-effects Indy-car chassis, and the whole vehicle weighed just 1,600 pounds. High-speed racers need to stick close to the ground and the Oldsmobile Aerotech I concept car was no exception, with an inch or less of airspace between its lowest body point and the ground surface.

A replica of the original Aerotech I toured the 1988 auto shows, while a subdued edition of its Quad 4 engine emerged under the hood of the Oldsmobile Cutlass Calais. This new engine was the first multi-valve powerplant to come from Detroit in recent times. As designer John Perkins said, "concept cars stretch the imagination" and show the public what stylists have in their minds.

Oldsmobile hit the jackpot with its Aerotech trio, delivering a record-breaker, a high-tech car of the future, a sedan to whet potential customers' automotive appetites, and a surprisingly muscular little engine that found its way into a broadening selection of GM vehicles.

Keep reading for specifications of the 1987 Oldsmobile Aerotech I concept car. 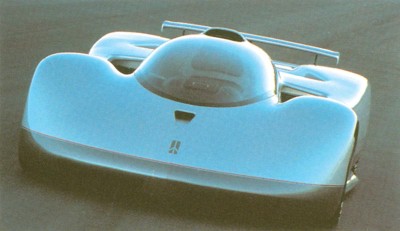 Two spinoffs were inspired by the 1987 Oldsmobile Aerotech I concept car pictured above. They were Aerotech II experimental and the Aerotech III sedan.
©2007 Publications International, Ltd.