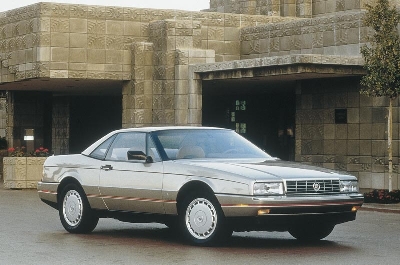 What few outside GM knew was that this much-improved Allante arrived long after the painful decision had been made to discontinue it. "We had to decide in the latter part of 1991 whether to continue it beyond 1993," Grettenberger said.

"It was due for a significant styling change, it needed a power top, and a number of new technological features were scheduled to be introduced on it. All that would have required a very significant investment…$300 to $500 million dollars…at a time when GM was hemorrhaging money and struggling to survive, which was very hard to justify on such a low-volume car, even though it was serving us well as an image vehicle.

"What would be the best use of that capital? Should it be invested in the low-volume Allante, or should we put it to work on higher-volume vehicles in the Cadillac lineup? That was ultimately where that money went, to the Eldorado, Seville, and De Ville, where it could have a much greater payback for our customers and stockholders.

Regrettably, it was economics that killed Allante, not the car itself, which reached the point in 1993 where it was absolutely a leader among any vehicles in the world in performance, handling, image, and presence. In retrospect, it was probably the right decision, but it bothered me -- and a lot of other key people in the Cadillac family -- a great deal that we had to discontinue it."

A more powerful 1993 Allante came out in early 1992 and served as the pace car for the Indianapolis 500.
©2007 Publications International, Ltd.

So why put a new high-tech engine in a car that was already canceled?

Grettenberger explained: "The purpose was to give the Northstar a year in a low-volume vehicle where we could keep track of every one of them before introducing it...in a much-larger number of cars. It was there as a one-year test bed with a few thousand owners to make sure everything was right. As it turned out, that engine was so good, it was almost foolproof."

The last Allante built was flown to Turin on July 2, 1993, and completed at Detroit-Hamtramck 14 days later. With 21,430 built, assemblies averaged just a little more than 3,000 a year throughout the car's lifetime.

Buschman describes the day he had to confirm Allante's cancellation with the dedicated Pininfarina crew: "When I went out to the plant to meet with the people firsthand, most of them broke down and were crying. 'Please tell us this is not true,' they were saying in Italian.

"I had to tell them it was true . . . and try to explain why as best I could. That's a moment you never forget. It gives you some idea of the tremendous importance that this had for those folks."

Editor's note: Some of the quoted material in this article comes from "The Story Behind the Cadillac Allante" by Rich Bednar (audio tape) ©2002.