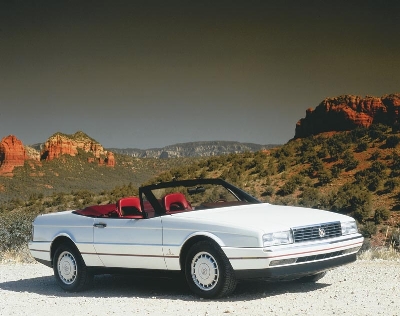 Cadillac’s luxury roadster hit the streets in March 1987. Billed as GM’s “passenger car flagship,” it was distinguished from other ultralux entries by its front-wheel drive and electronic sophistication.

Because the name Callisto translated into unfortunate things in some languages, a name search and an internal contest were held. Allante emerged as the winner in May 1985.

Its Pininfarina-built body was galvanized steel and aluminum with separate subframes to support its Eldorado-derived fully independent strut-type front and rear suspensions, with a stabilizer bar and coil springs in front and a Corvette-type composite transverse leaf spring out back.

Its steering was power rack and pinion, its brakes four-wheel power discs with the Bosch III antilock system, and its transmission a viscous-clutch electronically controlled four-speed automatic.

At a time when De Ville prices started at around $21,000 and even a Fleetwood Sixty Special listed near $35,000, the Allante was priced at a breathtaking $54,700, which included the removable alum­inum hardtop with a built-in rear-window defroster and a seven-year/100,000-mile warranty.

Still, the Allante was forecast to capture 6,000 to 8,000 annual sales, roughly half the U.S. market for such cars.“When we introduced the Allante, the dealer organization applauded it from every angle,” said John Grettenberger, who replaced Burger as Cadillac general manager in January 1984. “We introduced it to our Master Dealers, the top 100 in Cadillac’s entire dealer body, at a resort location, and Sergio Pininfarina himself came over to unveil it.“We made a conscious effort to position it as something that would have a great deal of appeal to affluent people, because it was a very expensive car. We wanted people driving Allantes who were opinion leaders and had high visibility in whatever their work might be." See how well the 1987 Allante debuted in the following page.For more information on cars, see: