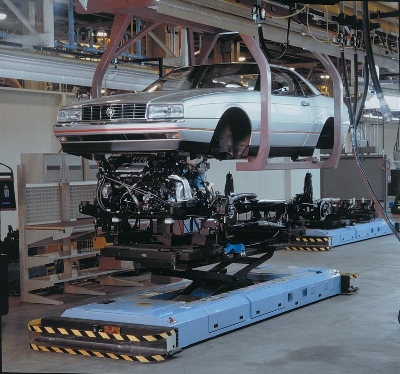 Pininfarina built the Allante body around the underbody and electrical parts from Detroit.
©2007 Publications International, Ltd.

One issue was that this car, internally code-named Callisto, would have the highest electronic content of any GM vehicle ever built. "That was a concern from the start," Anderson related, "because everything was going to be standard with a myriad of electronic assists.

"We didn't know how Pininfarina would build the body, put all the electronics in, and test it to make sure everything worked. We finally agreed that they would buy the diagnostic equipment and send their people over here for training to do those tests."

Allante chief engineer Dave Hill -- who later served as chief engineer and vehicle line executive for the C5 and C6 Chevrolet Corvettes and Cadillac's current XLR two-seater -- commuted to Italy at least once a month for five years. He pointed out that all that electronics complexity did not lead to reliability problems.

The Allante became the first GM car with electronics multiplexing, which enabled multiple signals to be sent serially along one data bus.

Another major challenge was the Pininfarina-designed manual top, which was difficult to operate and, at least at first, not completely weather sealed. "That was a misjudgment of what [buyers] in that segment were willing to do manually," Hill admitted, "and it held the car back. We had a wonderful one-button power top ready for 1994, but the 1994 Allante was never to be."

On the positive side, the Allante's dynamic development was outstanding. "That car had excellent dynamics, considering it was front-wheel drive," Hill asserted. "It was very competitive with Mercedes. Fred Wood was our car development guy and one of my heroes on the program."

See if Allante was able to catch Mercedes in the following pages.