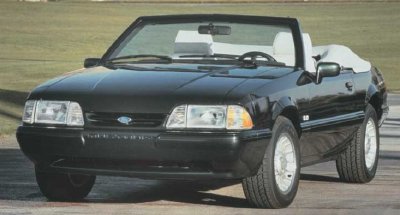 The main attraction of this "Limited Edition" LX 5.0L convertible, which arrived in January 1990, was its "deep emerald green" clearcoat metallic paint.

Ford marked its Mustang's 25th birthday with special events, and fans marked it with a high-performance model from customizer Steve Saleen. But the good times were not destined to last long.

With its birthday party over, Mustang carried on for the next three years without major change -- except on the sales chart, where the numbers plunged alarmingly. The two were not unrelated, but the real culprit was the onset of a sharp recession.

Model-year 1990 ushered in federally required "passive restraints." Mustang complied with a driver's airbag mounted in the steering wheel, which eliminated the tilt-wheel option, unfortunately. Door map pockets and clearcoat paint were also standard across the board, while options expanded with the addition of leather interior trim.

To its credit, Ford didn't try to pass this off as a belated birthday present, though a company press release did try to make a connection, saying the "entire Mustang lineup, which celebrated its 25th anniversary in 1989, continues a tradition of value leadership in the 1990-model year."

Actually, prices were still going up but remained competitive: under $9500 for a four-cylinder LX notchback, less than $19,000 for the top-line GT convertible. Even so, model-year volume plunged nearly 50 percent to 128,189.

The '91 GT hatchback started at $15,034. Most people paid extra, as V-8 sales were now roughly twice that of four-cylinder models.

Sales dropped again for '91, skidding to 98,737. More detail updates occurred. The anemic four now claimed 105 horsepower via a new eight-plug cylinder head, but only rental-car fleet managers cared. Convertibles sported a power top that folded closer to the body for a neater appearance, and automatic-transmission cars met yet another new federal edict by adding an interlock that required pushing the brake pedal before the shifter would move out of Park.

V-8 models got pretty new five-spoke alloy wheels of 16-inch diameter, an inch larger than before. LX 5.0s switched from tough-looking but rough-riding Goodyear Eagle GT+4 tires to more compliant 225/55ZR16 all-season Michelins. GTs retained the unidirectional Goodyears in that same size but offered the Michelins as a no-cost alternative.

Plummetting sales bottomed out in 1992 -- and then had nowhere to go but up. Find out how Mustang began its rebound on the next page.