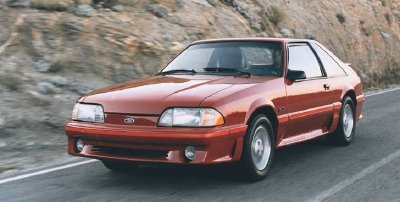 A smoother new nose helped lower the '87 GT hatchback's drag coefficient to 0.38, and it had other commendable performance numbers as well.

The redesign that resulted in the 1987 Ford Mustang wasn't all about styling and power. For such a familiar and relatively simple chassis, the '87 GT earned unusual praise for its driver-pleasing road-carving ability.

"The Mustang is a hedonist's car," declared AutoWeek's Phil Berg, "one that makes you want to go somewhere -- anywhere -- alone. Somewhere out in the tules with little road-hogging traffic.... You look forward to cornering with a passionate grip on the steering wheel. You start to believe the only reason for the quick [V-8] is to keep you from wasting valuable time on straights so you can find more rewarding section of two-lane. It's a very personal thing."

Britisher Mel Nichols, testing a new GT for Automobile magazine, thought "the SVO did not come and go in vain…. At the front, caster changes reduce camber loss in the corners, and [there are SVO] plastic ball joints, retuned bushings, and better mounts for the antiroll bar…. The Special Vehicle Operations development of a new crossmember allowed different front suspension pickup points, which in turn permit the fitting of decently large P225/60VR15 Goodyear Gatorbacks running 35 psi for reduced rolling resistance."

Nichols described GT handling as "predictable and progressive, so effortless and enjoyable…. The car turned into the bends cleanly, with understeer never passing the point of pleasing stability, then nudged through a long period of neutrality into progressive oversteer, talking all the way. A nudge of opposite lock held the tail. A touch more power pushed it out farther, with a little more lock balancing that, too.

"From the outset, the Mustang felt like a car that could driven fast and safely and satisfyingly. It had all the right sporting attributes, yet there was also something quite nice about its character. It came down to one word: forgiving…. Even on the narrow stretches and where the bends were visibly off-camber, there was nothing intimidating about driving it hard and fast."

No one griped about the GT's standard "articulated" front seats.

Motor Trend's Rick Titus did take Ford to task over brakes, at least for racing purposes. "Ford's designers chose to enlarge the front vented discs, but continued to use leftover Pinto drums on the rear…. It seems [rear disc brakes] died with the SVO. This is appalling, considering the Ford flies the tall flag of performance over the Mustang, yet doles its best brakes out to whiney little four-bangers and their luxo lines."

The reviewers also felt the price was fair. Read what they had to say on the next page.