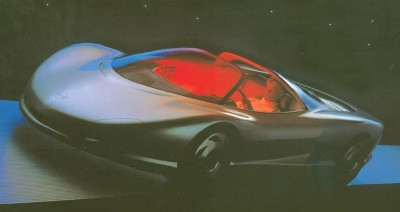 Some concept vehicles are strictly for show; others one day are meant to go. The 1986 Chevrolet Corvette Indy concept car was one that combined both duties. The mid-engine Indy stretched toward the boundaries of not only all previous Corvettes, but of the sports car world.

What's the first thing you were likely to notice about the Chevrolet Corvette Indy? Its stunning shape. Though it debuted at the Detroit Auto Show in 1986, it resembled the California Camaro that hit the auto exhibitions three years later. The next thing you might have noticed was that this 'Vette looked a lot more like something belonging on a race track than an "ordinary" Corvette. Not exactly a surprise, considering the "Indy" part of the car's name.

Not that the Chevrolet Corvette Indy was a simple lead-in to the later Camaro. It was far from that. This was a mid-engine design, suggesting the cream of the exotic car crop. A longing look at that far-forward cockpit in the ultra-low body (43 in.) immediately set a Corvette enthusiast's eyes aglow. The forward slope of the front hood was so steep that the car appeared to be ready to leap into a foxhole, while the protruding back end had an almost fin-like profile.

Displaying a huge amount of glass, the windshield and backlight were so steeply angled that they appeared almost horizontal. A super-wide air intake up front looked like a gigantic, barely-open mouth with only a pair of teeth remaining.

Toss in those exquisitely slanted and tapered headlamps, massive bodyside airscoops, and the huge glass dome that served as cockpit, and who could have resisted a chance to climb behind the wheel for a future-world spin? A few lucky folks did exactly that, and they reported the Indy belonged right up in the automotive stratosphere, along with the likes of the fabled Porsche 959.

Good concept cars never seem to be composed of the right materials to make it to production levels of completion. Therefore, the Indy soon evolved from strictly a concept car to a full-scale running prototype. Phase Three, rumored to have begun at the time of the release, was to be a preproduction version -- some believed it might have been a forerunner to a future 'Vette.

So in addition to original duties as a show car, the Indy was created as a test bed to evaluate advanced technical systems. Chief engineer Fred Schaafsma called it a "work-in-progress vehicle." The Chevrolet Corvette Indy, while not only looking good at speed, appeared to be a test mule for new Corvette technology.

To learn more about the development of the Chevrolet Corvette Indy concept car, keep reading.