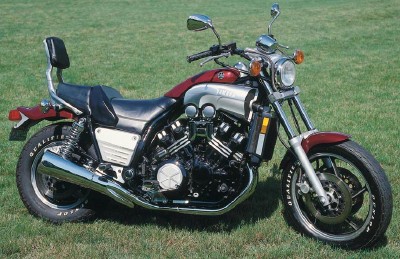 The powerful V-Max was introduced in 1985, and it would be years before another street bike could match its brutal acceleration. See more motorcycle pictures.

The 1985 Yamaha V-Max motorcycle became the undisputed King of Quick immediately upon its release. Neither sportbike nor cruiser, the V-Max was simply a dragster for the street.

The engine was based on a powerplant from the company's Venture touring bike but with numerous modifications. Among the tweaks was a variable intake system that opened an extra set of butterflies as rpm increased, allowing great low-end torque along with 145 peak horsepower.

Oddly, final drive was by shaft, which undoubtedly absorbed more power than would a chain, but the 1985 Yamaha V-Max motorcycle didn't seem to mind.

Fast the V-Max was; subtle it wasn't. What looked like a sliver of a fuel tank was actually just a cover for the electronics, as the tank itself was under the seat. Huge aluminum scoops beneath the tank looked like ram-air ducts, but actually hid the horns.

A lone speedometer sat atop the handlebars, with a tachometer, water temperature gauge, and warning lights situated in a "tank"-mounted instrument panel.

A stepped saddle helped keep the rider in place during throttle applications, and a duck-tail rear fender was there to...well...just look racy.

Though discontinued after a couple of years, the V-Max made a comeback in the late 1980s. But it would be some time before any motorcycle managed to top its straight-line performance.

Continue to the next page to see more 1985 Yamaha V-Max motorcycle pictures. 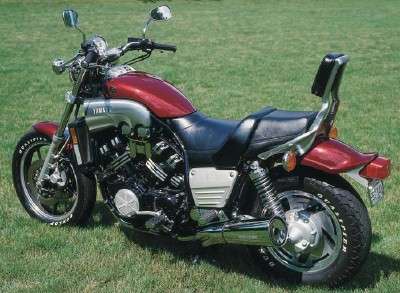 The V-Max was introduced in 1985, discontinued for a couple of years, then made a comeback in the late 1980s.

The 1985 Yamaha V-Max motorcycle had an interesting mix of design features, including a stepped saddle, duck-tail rear fender, mock air intakes, and a fuel tank located underneath the seat.

The mighty V-Max featured a 1200-cc four-valve V-four with variable intake runners and 145 horsepower.
The speedometer was perched above the handlebars, while the tach, water-temperature gauge, and host of warning lights sat in a separate instrument panel.
What appeared to be massive air scoops were really just covers for the horns, but they sure looked mean.