Conventioneers who spotted the 1985 Buick Wildcat concept car in its first public appearance, at the 1985 Specialty Equipment Manufacturers Association extravaganza in Las Vegas, might be forgiven for asking, "Could this be a Buick? Tomorrow's Buick?" One observer was heard to exclaim that "it looked like it would go better backwards than it would forwards."

Even though Buick has a long history of involvement with performance cars, and even racing cars, it's never quite been able to shed its stodgy image. People who weren't even born when Buicks had portholes somehow "remember" that the products from Flint, Michigan, are cars your father would drive.

Active participation in motorsports was one way to alter that image and attract younger customers. So Buick delved into IMSA GTP vehicles, the Trans-Am sports car circuit -- even dragsters and Indy cars. For the broader public, Buick created a series of striking auto-show concept cars, designed to broaden the marque's appeal and invigorate its staid image. One of the most memorable of these attempts has to have been the first Wildcat, which hit the auto-show circuit in 1953.

In the 1960s, this non-stodgy name went on a series of production Buicks, known for big engines and big proportions. Later yet, this far different Wildcat, low and bubble-topped, emerged from the Buick design studio. Initially billed as "a look at the future," the most recent Wildcat was one show car that hadn't shown its age.

Buick called the 1985 Wildcat concept car "an expression of muscular sculptural forms and exciting new mechanicals." Though not all of the mechanicals proved quite so thrilling, few could forget the car's dramatic glass-roofed, curvaceous form; not to mention its awesome bodyside air scoops and aggressively feline road stance. Depending on your perspective, you might have seen in its lines a teardrop, a shark, a rocket ship -- even a mushroom. Hardly a sharp edge could be found in its flowing, organic body structure.

Onlookers were advised that if a car like the Buick Wildcat concept car were to go into production, they would virtually wear it and use it "like a pair of form-fitting driving gloves." Sounds like overblown automaker hype, but the claim wasn't far from the truth. Even a glance at the low-riding creation makes one want to climb inside and take a fast spin around the block, if not the race track. 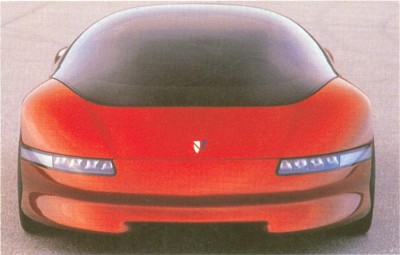 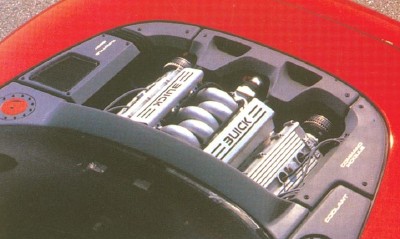 The Wildcat offered a number of design features which were innovative for their time, features worked out during the 1985 Buick Wildcat concept car's development process.

While most cars, whether production or show models, hid their engines under an opaque hood of some sort, Wildcat flaunted its mid-engine powerplant.

Everyone could take a peek at the 3.8-liter V-6, with its 24-valve, double-overhead-cam configuration which protruded upward from the rear deck. Ahead of the 230-plus horsepower engine sat a 4-speed automatic transmission, sending power into a chain-driven transfer case and central differential. Yes, that's right, a transfer case meant the Buick Wildcat concept car had full-time four-wheel-drive. About two-thirds of the output torque was delivered to the back wheels, one-third to the fronts.

Mounting the familiar V-6 behind the passenger compartment was a big design detour for Buick. The engine drove all four of Wildcat's wheels.
©2007 Publications International, Ltd.

Manual shifting was possible, overriding the automatic transmission via a motorcycle-type selector. A computer prevented over-revving of the engine. More important to drivers who evaluated the car was a governor that limited speeds to 70 mph. No telling how much an unfettered Buick Wildcat concept car might have been able to deliver.

Powertrains and gadgetry aside, the Buick Wildcat's body obviously proved to be its main attraction, just as its creators had intended. Crafted from a composite of high-strength fiberglass resins and carbon fiber, it required no metal structure.

Even the suspension carriers bolted directly to the nonmetallic body, via steel sub-frames. The front-hinged canopy was made of cast gray acrylic and carbon fiber with glass-reinforced polyester resin.

Buick said the Wildcat concept car was designed to feel "like a pair of form-fitting driving gloves."
©2007 Publications International, Ltd.

Assigned first to Buick's performance group, the project began as an assignment for junior students at the Center for Creative Studies. Working for a year, the students were given free rein and turned in hundreds of sketches. Half of them worked on the body, the others on interior designs.

Eventually, a particular set of sketches looked just right, so Rand prepared a full-size drawing. Clay modeling came from the expert hand of Steve Jordan. The basic concept was described as "a pod pushing a pod." That meant an interlocking pair of pods, one for the driver and the other carrying the engine. Those massive side air intakes weren't just for show, but were necessities dictated by the placement of the car's radiator.

From the start, the Wildcat was intended to be drivable, not just a showstopper -- though it also showcased the paint and plastics of the PPG organization, which footed some of the bill.

Final development took place at Studio Two, with the actual body prototypes crafted by the Triad company. The car's sculptured-look interior, no less radical than its body, was styled by Nellie Toledo.

Wildcat's project manager, Ed Roselle, told Car and Driver at the time of the car's early appearance that "this is the type of car that a guy would take down to [Detroit's] Woodward Avenue in the 1990s." It didn't happen, but now that the 1990s have come and gone, what enthusiast or dreamer would turn down an opportunity to do exactly that?

Go to the next page for specifications of the 1985 Buick Wildcat concept car. 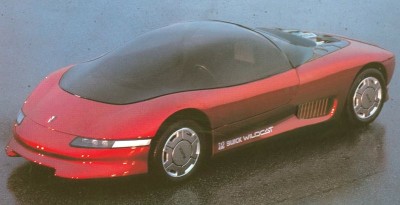 A two-seat, midengine supercar was a departure from virtually every aspect of Buick tradition, as these 1985 Buick Wildcat concept car specifications make clear. Alas, about the only feature of the car that would be seen in Buick showrooms was a version of the 3.8-liter V6.