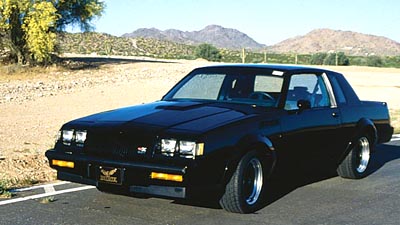 More potent still was the derivative 1987 GNX, a joint Buick-McLaren Engines-American Sunroof effort with an alleged 300 bhp -- later proved to be 276 actual -- thanks in part to a "smarter" engine-computer chip. That one did 0-60 in 4.7 seconds by one account, and the standing quarter-mile in 13.5 seconds at 102 mph -- this despite a still-mandatory four-speed automatic transmission. For tire-smoking thrills, only a Corvette could touch these blocky bombs.

But their days were soon numbered by Buick's retreat from overt performance toward "premium" cars like the 1988 front-drive Regal, though a handful of GNs -- not GNXs -- were built after other rear-drive Regals departed. GNX's low announced production started a bidding frenzy among would-be owners, and the same supply/demand factor will make it the most coveted of Flint's final factory hot rods.