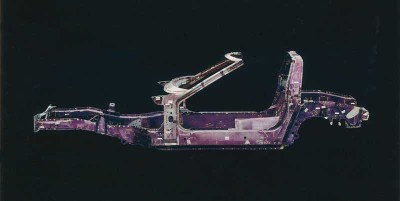 The C4 made history as the first unit-construction Corvette, using this sturdy "birdcage" or "uniframe" structure.

The underlying mission statement for the 1984 Corvette design was "form follows function." While many automakers had paid only lip service to following that well-worn dictum over the years, both Corvette chief engineer Jerry Palmer and Corvette chief engineer David R. McLellan deemed it essential in order for the new Corvette to remain competitive with the latest sports cars from Japan and Europe. Specifically, their task was to eliminate the deficiencies for which prior versions had been roundly criticized, while still maintaining the traditional Corvette look and driving feel. The new car would have to cut through the air with superior aerodynamics, coddle its passengers with more interior room, and -- most importantly -- serve up even better handling than earlier models.

To that end, the C4 would have to be completely re-engineered -- a beefed-up Shark with new styling simply would not suffice. Both design groups began their tasks with the so-called "T-point," which is the position of the driver's hip joint relative to the interior and the rest of the car. This was raised an inch and moved an inch or so rearward, which opened up more legroom and also made for a higher driving position relative to the road. Further, the change enabled the car's revised chassis to sit higher than before for more ground clearance.

The old perimeter-type ladder frame was replaced by a steel backbone design not unlike that pioneered by England's Lotus. In the Corvette, the "spine" took the form of a C-section beam rigidly connected to the differential and carrying the driveshaft. This arrangement reduced weight and opened up more cockpit room by eliminating the transmission and differential crossmembers, and by permitting the exhaust system to be run beneath the driveshaft instead of alongside it.

Welded to the backbone was what Chevy called an "integral perimeter-birdcage unitized structure" or "uniframe," making the new model the first Corvette to employ modern unit construction instead of the old body-on-frame configuration. The "birdcage" formed the windshield and door frames, lower A-pillar extensions, rocker panels, rear cockpit wall, and front subframe. It also included a "hoop" above and behind the cockpit, both for additional rigidity and as a hinge point for the lift-up rear window. Galvanized inside and out for corrosion resistance, this structure effectively comprised a skeleton onto which the fiberglass outer panels would attach. Completing the basic assembly were an aluminized bolt-on front suspension carrier and a bolt-on extension for the back bumper. 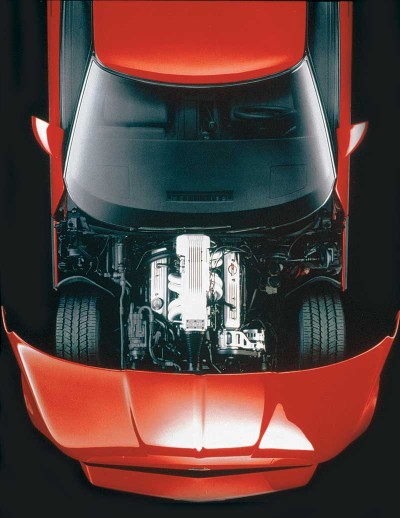 The C4's one carryover component was the L83 V-8 with "Cross Fire Injection" as fitted to the final Sharks. Engineers placed it slightly behind the front-axle centerline for optimum front/rear weight balance.

This more rigid platform allowed McLellan's staff to rework the suspension for greater handling precision. In front remained the familiar unequal-length upper-and-lower A-arm arrangement, though with a new twist. Instead of a coil spring on each side, a single reinforced-fiberglass leaf spring was mounted transversely between the two lower arms, as at the rear. A 20-millimeter anti-roll bar was standard.

Even bigger changes occurred in the rear, where Zora Arkus-Duntov's old three-link geometry gave way to a more sophisticated five-link design. This comprised upper and lower longitudinal links between the body and hub carriers, twin lateral strut rods tying the differential to the hub carriers, another transverse plastic leaf spring (of the type used since 1981), and the customary U-jointed halfshafts and rear tie rods.

Steering was now a rack-and-pinion design, changed from GM's usual recirculating-ball mechanism. It had a forward-mounted rack for greater precision and a standard high-effort booster for better directional control at high speeds. Normal ratio was a constant 15.5:1, which was quite fast for an American car. A tilt/telescope steering wheel was made standard.

As before, stopping power was supplied by large ventilated disc brakes at each wheel. The brakes themselves were a new design created by Girlock, an offshoot of the British Girling company. Making extensive use of aluminum, they had large 11.5-inch-diameter rotors and featured quick-change semi-metallic pads (held by a single bolt) with audible wear indicators.

With improved handling being a major consideration, the car was originally intended to ride on larger 16-inch wheels and Pirelli's P7 performance tires, then the state of the art. But the rubber ultimately used in production was Goodyear's Eagle VR50, specifically designed for the new Corvette and sized at P255/50VR-16.

The "V-rated" tires were designed to withstand a maximum speed of over 130 miles per hour, which was a hint of the car's performance potential. These tires were notable for their "gatorback" tread design -- a deep V-pattern with horizontal slots perpendicular to the sidewalls, all of which suggested the appearance of an alligator's back. Evolved from Goodyear's Formula 1 and Indy-car rain-tire program, the design was said to shed water more effectively to resist hydroplaning, which is a perpetual problem with wide, low-profile rubber. The tires were mounted on cast-alloy wheels that were 8.5-inches wide up front and 9.5-inches wide in the rear. These were among the first of the so-called "unidirectional" wheels, in which the radial fins were shaped to scoop in cooling air to the brakes only when turning forward. This, in turn, necessitated specific left and right wheels front and rear, none of which were interchangeable.

More evidence of the Design and Engineering departments' teamwork was found under a new "clamshell" hood, which was part of the design concept from the very beginning. Recalling Jaguar's famed E-Type and various mid-engine Corvette experiments, the design integrated the hood with the front fender tops and lifted to a near-vertical position.

Residing beneath the clamshell was the 5.7-liter (350-cid) small-block V-8 carried over from 1982, with twin throttle-body electronic fuel injection and "CrossFire" manifolding with dual ram-air intakes. Though still designated L83, it now produced five more horsepower -- a total of 205 at 4,300 rpm -- and five extra lbs/ft of torque -- 290 at 2,800 rpm -- via a more efficient radiator fan and accessory drive. It sported a flat-top die-cast magnesium air cleaner created by Palmer's crew. Separate vacuum-modulated doors molded into the underside of the hood regulated incoming air flow; the ducts mating with the air cleaner assembly when the hood was closed. A single air intake below the front bumper fed air to the underhood ducts, making the '84 a "bottom-breather" like the Shark before it. The engine compartment was color-coordinated in silver and black. Palmer even persuaded GM's AC-Delco Division to develop an appropriately styled battery.

A welcome return for the new model was a four-speed manual gearbox as the Corvette's standard transmission, but it was nothing like any seen before. Called "4+3 Overdrive," it was basically an orthodox four-speed with a second set of three planetary gears attached at the rear. When signaled by the engine's Computer Command Control electronics, the auxiliary gearset engaged through a hydraulic clutch to provide a stepdown or overdrive reduction of 0.67:1 in each of the top three gears. The intended result was improved part-throttle fuel economy, though in practice testers noted little difference between the manual and the automatic transmissions in that regard. For best performance, engagement was electronically inhibited at wide throttle openings, but this was quickly supplemented by a console-mounted manual override switch. Standard final drive was 3.07:1, with 3.31:1 gearing available for better standing-start performance.

Production delays postponed deliveries of the 4+3 Overdrive until early calendar '84, however, so the first of the new Corvettes were equipped only with an automatic. Returning from 1982, but as a no-cost option now, was the GM 700-R4 four-speed overdrive automatic, still with a lockup torque converter clutch effective in all forward ratios except for first.

Despite Chevy's considerable effort to keep weight as low as possible, the new Corvette emerged heavier than expected -- by a good 300 pounds -- though it was 250 pounds lighter than a comparably equipped '82. Numerous subtle tricks contributed to this, not the least of which was the extensive use of lightweight materials. One of these was a driveshaft and supporting yokes made of forged aluminum, welded together. Another was a radiator support made of plastic sheet molding compound (SMC). The twin transverse reinforced-fiberglass leaf springs weighed half as much as four steel coil springs of comparable size. (They were also claimed to be more durable, capable of withstanding five million full jounce/ rebound cycles, versus about 75,000 for the steel coils.) Plastic was also employed for the cooling system's twin expansion tanks, radiator fan, and shroud.

Aluminum figured extensively elsewhere. Front-suspension control arms and knuckles as well as the rear lateral arms were all aluminum forgings, as was the chassis's C-section "spine." The automatic transmission's torque converter housing was formed from sheet aluminum. Brake splash shields were aluminum rather than steel, and calipers were made from an iron-aluminum alloy that provided greater strength with less weight.

See the next page for a closer look at the design of the 1984 Corvette. 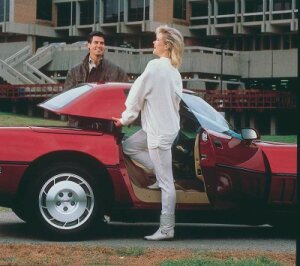 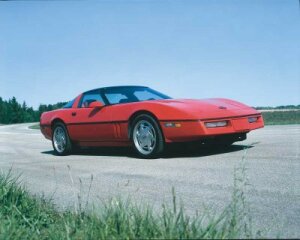 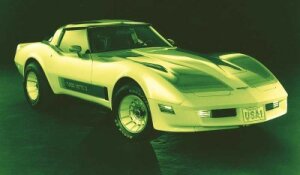