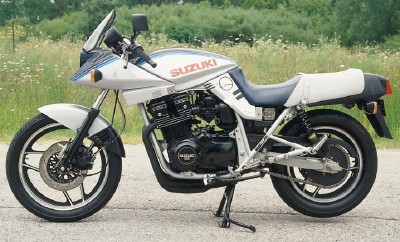 The 1983 Suzuki Katana 1100 motorcycle marked a big step in the evolution of Suzuki motorcycles. Suzuki was the last of the Japanese manufacturers to add road-going four-strokes to its line; that event finally came with the introduction of the four-cylinder GS750 in 1976.

Fitted with dual overhead cams (but only two valves per cylinder), it was slightly quicker than the venerable Honda 750, but that Honda was no longer the performance target to shoot for.

Inevitably, larger Suzukis followed, and not far behind. A GS1000 was introduced the next year, and made a big splash because it was among the most powerful and best-handling Japanese fours available.

But no bike stayed at the top for long during this period, and competitors quickly overshadowed the GS1000.

At a time when superbikes were beginning to adopt fairings and other sporting touches, Suzuki was again falling behind the leaders. In an attempt to make up ground, the company brought out the Katana.

Compared with Suzuki's "standard" motorcycles -- and even with other manufacturer's sport models -- the Katana looked to be from outer space.

An oddly sculptured wedge-shaped fairing sat above a half-moon front fender and ahead of an angled fuel tank. Vertical side covers contained multiple slats and a circular fuel valve. Seats were divided; one color on the front half, another color at the rear.

It was decidedly different and certainly stood out, but the look prompted mixed reviews.

Though the name would carry on, the controversial first-generation Katana would not. Subsequent Suzukis -- even those that wore the Katana name -- would more closely follow the design status quo. 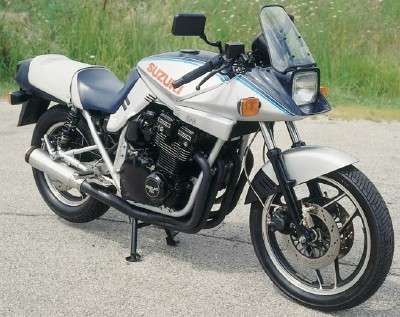 Seats were divided; one color on the front half, another color at the rear.

The 1983 Suzuki Katana's bizarre styling set new standards for strangeness in motorcycles, from its half-moon front fender to its dual tone seat. But is was hardly "all show no go," as the 1100-cc four featured double overhead cams and four valves per cylinder.

Handling was aided by a stiff suspension with antidive forks.
The half-moon fenders helped create the Katana's unique, modern look.
The Katana integrated its speedometer and tachometer into a single gauge pod.