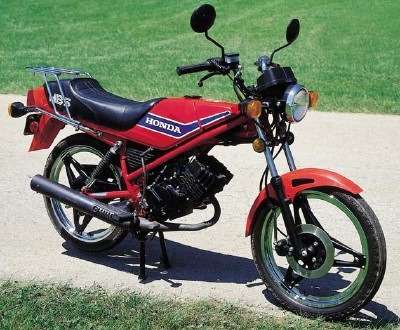 The Honda MB-5 combined the agility and economy of a scooter with several features of bigger bikes, and found a devoted audience. See more motorcycle pictures.

The 1982 Honda MB-5 motorcycle was a blend of scooter and motorbike. The combination didn't draw a large audience, but the little commuter bike certainly had its virtues, and its admirers.

Sporty looks aside, the 1982 Honda MB-5 motorcycle was no scorcher. Its 50-cc two-stroke single was aimed more at economy than speed. But several "big bike" features could be found on it.

It had a speedometer and a tachometer, the latter redlining at a dizzy 10,500 rpm. And it boasted a front disc brake, as well as Comstar wheels from Honda's bigger motorcycles.

A two-place saddle was fitted, though surely the little engine would be taxed carrying a pair of passengers.

Front disc brake seemed like overkill on a bike with such modest speed potential, but probably helped inspire confidence in new riders.

Unique and endearing as it was, the Honda MB-5 was short-lived in the U.S. Other manufacturers didn't jump on the idea, and Honda abandoned the MB-5 after just a few years.

Go to the next page to see more pictures of the 1982 Honda MB-5 motorcycle. 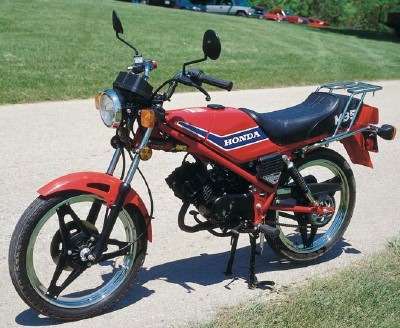 The 1982 Honda MB-5 motorcycle was an experiment unique to Honda. Other manufacturers didn't even attempt to blend a scooter and a motorbike, and within a few years Honda itself abandoned the concept.

The MB-5 ran a 50-cc two-stroke single engine that didn't use much fuel, but didn't produce much power.
Despite its low-speed nature, the MB-5 was fitted with a confidence-inspiring front-disc brake.power.
The MB-5 had a two-place saddle, but was even slower with a pair aboard.power.
The little engine redlined at an impressive 10,500 rpm.