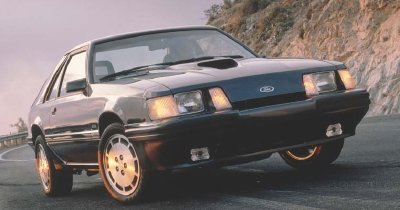 The 1984 Ford Mustang SVO was a modified Turbo GT hatchback, fine-tuned with an eye for racing.

Fearing a deepening of the energy crisis (which didn't materialize), Ford massaged its 2.3-liter turbo-four even more for '84. The result was a very different performance pony, the 1984 Ford Mustang SVO.

Engineered by Ford's recently formed Special Vehicle Operations unit (hence the name), this was basically a Turbo GT hatchback with enough modifications to satisfy the most confirmed devotees of European machinery.

Notable was the first air-to-air intercooler in American production. This chilled the pressurized air for a denser, more powerful charge. A world first was electronic control to vary boost pressure, which could reach 14 pounds per square inch, said to be the highest of any production turbo engine to that point. There was even a cockpit switch for "tuning" the engine electronics to allow running on regular or premium-grade fuel.

With these and other racing-inspired ideas, maximum horsepower jumped by a claimed 20 percent to 175 at 4500 rpm versus the 1983 Mustang Turbo GT. Torque increased some 10 percent to 210 pound-feet at 3000 rpm. Putting it to the ground was a five-speed manual gearbox with special Hurst linkage driving to a Traction-Lok limited-slip differential with 3.45:1 final drive.

Spring rates and bushings were stiffened, premium Koni adjustable shocks replaced the stock dampers, the front antiroll bar was thickened (from 0.94 to 1.20 inches), and a rear bar was added along with an extra inch of front wheel travel. The stock rack-and-pinion power steering went from variable-ratio to fast constant-ratio gearing but retained high-effort valving to optimize road feel.

Last but not least was "Quadra-Shock," a nifty idea borrowed from the T-Bird Turbo Coupe (and easily adapted from that Fox-based relative). The name referred to an extra pair of shock absorbers sitting almost horizontally astride the differential between the axle and the body structure. The idea was to minimize jittery axle "tramp" in hard acceleration, and it worked. Intriguingly, Quadra-Shock had been sort of promised for the V-8 GT back in '82 but was delayed for various reasons that are still not entirely clear.

Unfortunately for Ford, the overpriced Mustang SVO was doomed to be a sales failure. On the next page, find out what went wrong for the SVO.