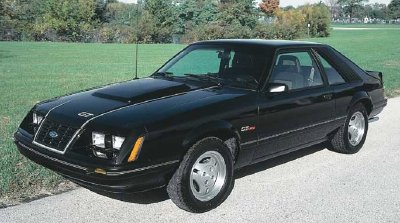 Ford revived a "blown" Mustang in mid-'83, but the mechanically improved four-cylinder Turbo GT was a poor seller, being slower and costlier than the similar V-8 GTs.

The Turbo GT came in hatchback and convertible form and with a reengineered version of the turbocharged "Lima" 2.3-liter four-cylinder developed for the slick new 1983 Thunderbird Turbo Coupe.

The principal changes here involved junking the carburetor for Bosch port electronic fuel injection and positioning the turbocharger upstream of the induction system so as to "blow through" it rather than "draw down" from it. Also new was Ford's latest EEC-IV electronic engine control system, which governed injector timing, idle speed, wastegate operation, supplementary fuel enrichment, engine idle, and emissions control.

Other upgrades included forged-aluminum pistons, valves made of a special temperature-resistant alloy, lighter flywheel, die-cast aluminum rocker cover, and an engine-mounted oil cooler. Per usual turbo practice, compression was lowered from 9.0:1 to 8.0:1, and premium unleaded fuel was recommended for best performance. The result: 145 horsepower at 4600 rpm -- only 5 horsepower more than the previous version, but better than the magic "1 horsepower per cubic inch" ideal for this 140-cube mill. Torque was 180 lb-ft peaking at a relatively low 3600 rpm.

Despite its small size, the turbo-four packed the same horsepower advertised for the base 1983 Chevrolet Camaro Z28 V-8. With that, the revived Turbo Mustang could run 0-60 mph in well under 10 seconds and the standing quarter-mile in about 16 seconds, and return 25 mpg overall. But the T-Bird Turbo Coupe could match all those numbers, and the fortified 5.0-liter Mustang now flew to 60 in near six seconds flat.

The '83 Turbo GT didn't capture sales, probably because of its price. Turbos were $250 more than comparable V-8 GTs, yet the V-8s were faster.

Tough to Drive, and to Sell

Although it seemed to offer the best of both worlds, the improved Mustang Turbo GT laid a sales egg. The lack of available automatic transmission and air conditioning probably cost more than a few sales, but the real problem was price. The Turbos started some $250 above comparably equipped V-8 GTs, yet they were slower. Also, their peaky engine was relatively weak on low-rpm torque, so it had to be caned most all the time.

The V-8, by contrast, was a traditional, relatively lazy American engine with muscular low-end thrust, and it just loafed along easily at highway speeds. Ford said a late introduction and slow production ramp-up limited Turbo GT sales, and only 483 of the '83s were built. But the real damper is best expressed by that time-worn Detroit adage: There's no substitute for cubic inches. Not even high technology.

Ford's Special Vehicle Operations unit unveiled the Mustang SVO in 1984, which was basically a Turbo GT hatchback with racing-inspired modifications. To learn all the details about the Mustang SVO, keep reading.