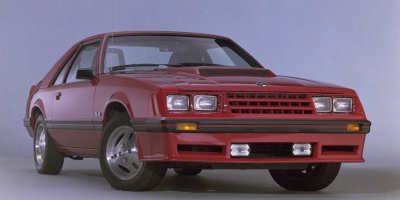 Most every '82 Mustang GT delivered for magazine road tests had the TRX suspension -- a sensible PR ploy, even if the tires didn't like dragstrip work. "The Michelins provide superb cornering grip," said AutoWeek's Levy, "but they're poorly matched against the Mustang's torque. Delightful. Full-throttle acceleration is a rush job, quick and satisfying…. Braking is just as sure. A fine match. Try a turn. Brake, commit, now steer with the throttle. That's right, steer with the throttle. It works. The TRX suspension guys have been vindicated.

"Unlike the testy 2.3 turbo or weak-kneed 4.2 V-8," Levy continued, "the 302 has more than enough guts to take full advantage of the suspension, and the suspension responds in kind, sticking to its Twilight Zone limits, then breaking away smoothly and progressively."

McCraw himself then took to a tight, twisty low-speed section replicating the world's worst pavement. "We simply gave up after four bone-jarring laps; [the car] didn't generate enough thump and shudder to complain about. After three years of experience with the Mustang, the engineers have managed to dial out all but a few noises and harshness sources. This GT is one buttoned-up automobile."

Both reviewers came away raving about the '82 GT. McCraw termed it "the best-balanced, most capable Mustang ever done." Said Levy: "It's as if the car's entire personality is derived from the pulse underhood. The engine makes everything all right. Suddenly the Mustang is young again."

Several months later, Road & Track drove a GT against a pair of redesigned 1983 Chevy Camaro Z28s -- and was reminded of 1970: "For today we once again have a super-stylish new Camaro, featuring a newly refined chassis…pitted against a now somewhat dated Mustang with a chassis that's hard-put to handle its engine's generous torque. A Camaro that offers…moderate power with a manual transmission and somewhat better power only with an automatic. A Mustang that specializes in good old-fashioned straight-line performance against a Camaro that revels in curves."

Though these editors ultimately picked the new over the familiar by a small margin, they admitted others might disagree. "Chevrolet has not revolutionized the Camaro, but merely updated it," R&T concluded. "If brute performance is a top priority, then the Mustang GT 5.0 gets the nod."

Lusty H.O. aside, there was little excitement in Mustang '82. Model nomenclature was revised, with L, GL, and GLX hatchbacks and notchbacks arrayed below the GT in ascending order of price and luxury. Prices ascended greatly, ranging from the L coupe at $6345 to the GLX hatchback at $7101. And that was with four-cylinder power. The 200-cubic-inch six added $213; the 4.2-liter V-8 cost $263.

Mustang offered a slightly broader '82 lineup with new L, GL, and GLX titles for notchbacks and hatchbacks, plus hatchback-only V-8 GT. GLX trim and features basically duplicated those of the former Ghias.

At least the extra dough included a few new standard items: a larger gas tank (up from 12.5 to 15.4 gallons), wider wheels (now 14-inchers), steel-belt radial tires, and remote-control driver's door mirror. After compiling a poor reliability record, the turbo-four was withdrawn, though it would soon return. Remaining powerteams were reruns except for the 4.2-liter V-8, where the "mandatory option" automatic transmission got a fuel-saving lockup torque converter effective in all three forward gears, a device we'd see more of in the future.

The market slump that began in 1979 bottomed out in '82, when Mustang sales plunged by about a third to 130,418 units. Helped by an early sendoff that spring, Chevy sold some 179,000 of its new third-generation Camaros; Pontiac retailed 116,000 of the sister Firebirds. They cost more too, but at least they were visibly new.

One bright spot for Ford was that model-year V-8 Mustang sales soared no less than five-fold over '81. To learn whether Ford was able to keep up that success for the 1983 model year, keep reading.