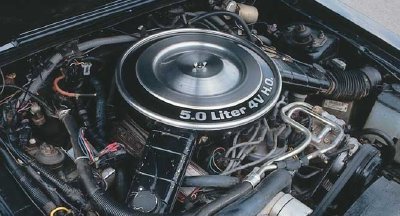 The '82 Mustang's optional H.O. V-8 engine didn't come cheap, but it did come with a host of goodies, such as power steering and power brakes.

Reflecting separate but parallel development tracks, the Mustang's new H.O. engine was not tied to the GT model, being available in other '82 Mustangs for $402 with the TRX suspension or $452 without. Those prices seemed steep, but the engine came with its own bundle of good stuff.

Beside the four-speed tranny, Ford threw in a 3.08:1 Traction-Lok differential, power steering, power brakes with enlarged front discs, and the baseline "handling" suspension, which was also a stand-alone option tagged at just $50. The TRX suspension cost $533-$583 this year except on the GT, where it added a mere $105 -- another reason to choose the top horse, as most V-8 buyers did. Incidentally, the tame 4.2-liter (255-cubic-inch) V-8 was available for the GT as a $57 credit option, though few buyers were likely penny-wise and performance-foolish this way.

McCraw noted that the GT got "the nod from the highest echelon of management and [was first slated] as a 1982 1/2 addition. But the swell of enthusiasm at the marketing and engineering levels, and the speed with which engineering problems were solved, have pushed the program up to an October 1 startup, only a couple of weeks after introduction of the 1982 Ford line."

The GT was a showroom symbol of Ford's renewed commitment to competition, chiefly road racing, begun in 1981. Both were part of what McCraw termed a "new marketing strategy. Public reaction to this return to big-league racing has been overwhelmingly positive; a whirlwind of mail has told the company to start building something that's quick, fast and fun to drive…."

Ford happily lavished much attention and money on its newest H.O. V-8. For example, the intake manifold was switched from steel to lightweight aluminum, and the exhaust system was redesigned for quicker warm-up -- so the catalytic converter would start burning off nasty pollutants that much faster -- and for less performance-sapping back pressure.

Impressively, there was no muffler, yet the car was fully street-legal noise-wise. A new accessory drive reduced power losses by declutching the air-conditioning compressor and radiator fan at full throttle. The result, as McCraw relayed from engine engineer Jim Clarke, was more power to the rear wheels than most cars managed.

The '82 Mustang GT's TRX suspension delighted drivers -- it earned high marks for handling and performance. Keep reading to find out what the reviewers had to say.