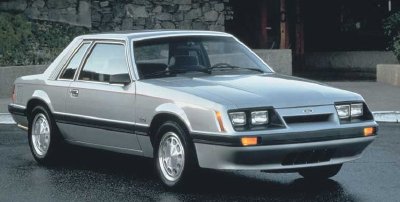 Despite few changes for '86, Mustang notched decade-high model-year sales of nearly a quarter-million units. As before, small "5.0" front-fender badges signaled V-8 horsepower, as in this tame-looking LX notchback.

The 1986 Ford Mustang achieved a decade-high sales total of 224,410 for the model year, despite few changes to the car or its lineup. That was testament to the idea that Mustang delivered what it's public wanted, and was building a loyal customer base at the same time.

The main alteration for 1986 was adoption of more precise sequential port fuel injection for the lone 302 V-8. It was rated at 200 horsepower and offered with either five-speed manual or four-speed automatic transmission.

The rear axle was beefed up to handle peak torque that now stood at 285 pound-feet. Both the V-8 and Mustang's V-6 offered smoother running via viscous (fluid-filled) engine mounts, an upgrade taken from the 1985 Ford Mustang SVO. Buyers this year also enjoyed a longer anti-corrosion warranty, extra sound-deadening material, and a more convenient single-key locking system.

Mustang went to a single V-8 for '86, a new 200-bhp H.O. with electronic port fuel injection that split the power difference between the previous carbureted and throttle-body-injected versions.

If nothing else, the SVO highlighted the adaptability and staying power of the "New Breed" Mustang. But by the seventh year of the Fox generation, some observers felt a replacement was past due.

To be sure, Ford had done an admirable job keeping the Mustang interesting and competitive. Indeed, no less a power than Ford Motor Company president Don Petersen favored "continuous improvement," the strategy that was then helping Japanese automakers make serious inroads into the U.S. car market.

Answering a request from the California Highway Patrol, Ford devised a high- speed Mustang pursuit package in 1983. Within three years, thousands of such cars were catching speeders in 14 other states. This one served in Florida.

But though many journalists were amazed by how good the old Mustang still was, they couldn't help wonder when a new one would appear. Noting how "German" the GT had become for 1985, Car and Driver's Pat Bedard wrote, "You don't expect such refinement this late in the model cycle…. But the Germans keep after their stock, always improving, and the German influence in Ford is being felt. It's a good thing, too, because the Mustang is going to get older still before it's replaced, probably in 1988. But if it keeps aging this gracefully, who cares?"

Bedard was both right and wrong. Though a new Mustang was being groomed for '88, the no-longer-new New Breed still had a long road to travel.