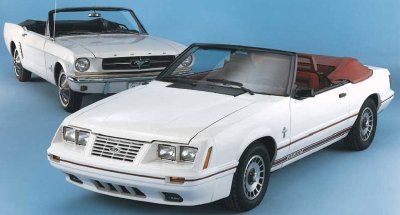 Mustang marked 20 years with a modest trim option for the 1984 V-8 GT convertible (here shown with a classic '64) and hatchback.

The entry-level L notchback got a hatchback sister, while GL and GLX models were replaced by LX versions with roughly the same features, plus a newly standard V-6 for the convertible. Interiors were spruced up with a new steering wheel and dashboard facing. Dash lighting switched from green to racy red.

There was also a second, tamer 302 V-8 for '84, with throttle-body electronic fuel injection (TBI) and 10 fewer horses than the carbureted H.O. (165 total). This was reserved for non-GTs with automatic, which now came in two forms as well: the familiar three-speeder and Ford's corporate four-speed unit, whose overdrive top gear allowed use of a shorter (numerically higher) final-drive ratio (3.27:1 versus 2.73:1) with no ill effects on mileage.

TBI was also applied to the Essex V-6, bringing it up to 120 horsepower and 205 pound-feet; here, three-speed SelectShift was now your only transmission choice. In line with a widening industry trend, all manual-shift Mustangs received a starter interlock that prevented accidental lurching should you forget to depress the clutch pedal before cranking the starter.

By this time, gasoline was not only plentiful again but was even becoming cheaper in some places. Not surprisingly, many folks just had to have a good old-fashioned V-8. This illustrates a peculiar irony of the 1980s: the renewed popularity of relatively large-displacement engines at a time when automakers were discouraged from selling them by government regulations now out of synch with market forces and a worldwide oil glut.

It was all too bad, for the Turbo GT and SVO were honest attempts at reconciling performance with economy, a worthy goal. A shame most buyers didn't care.

The 1984 Mustang line stretched beyond the GT and SVO performance models to the L and LX lines.

Mustang reached the ripe old age of 20 in 1984. To mark the occasion, Ford dusted off the GT-350 name from Shelby days for a limited-edition model. It amounted to a trim option for the V-8 GT convertible and hatchback consisting of Oxford White paint, Canyon Red rocker-panel stripes, and matching red interior with "articulated" front seats.

At least it didn't cost much: $25-$144 depending on body style and other options. Ford ads promised no more than 5000 copies, but one source says the final tally was 5260. No matter. For such a milestone birthday, this special was no big deal, except for Dearborn lawyers.

Carroll Shelby claimed that he owned "GT-350" and had been promised that Ford wouldn't use the name without his okay. Carroll, now working again with his old friend Lee Iacocca at Chrysler, may have been thinking of it for one of the hot Dodges he was building at a small-scale facility in California. In any case, he was miffed enough to hit Ford with a copyright infringement suit. Sometimes, it just doesn't pay to be sentimental.

Mustang sales were a pretty good barometer of the mid-Eighties new-car market and national economy. Demand hit bottom for model-year 1983 at 120,873 units, then strengthened to 141,480, followed by 156,514. By contrast, sales of the Chevrolet Camaro and Pontiac Firebird, initially higher than Mustang's, began trending down and by 1987 would trail those of Ford's veteran pony car.

Which was quite remarkable considering that Mustang was an older design with a less sophisticated chassis and somewhat lower handling/roadholding limits. Yet these apparent minuses were actually pluses.

Many buyers preferred the Mustang's more traditional road manners and generally superior ride. What's more, earlier amortization of tooling costs allowed Ford to keep prices somewhat lower than GM could, even though the end of a decade-long inflationary spiral was helping both companies in that regard. But Ford also seemed to build its cars better each year -- GM didn't -- and kept improving them, too.

Ford continued to enhance the Mustang line's performance while keeping that characteristic pony car charisma that no other car could match. Keep reading to learn about the wide appeal of 1985 Ford Mustangs.