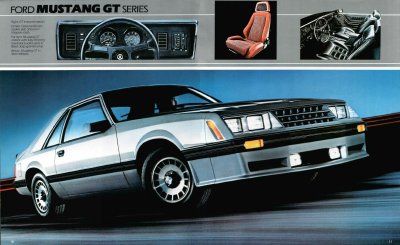 Donald Petersen was shaking things up at Ford, and the Mustang line was no exception. The first benefit of the changes at Ford headquarters, in particular the new focus on performance, appeared with the 1982 Ford Mustang GT. The revised car packed the most potent small-block V-8 in recent Ford history.

"The Boss is Back!" ads declared. And it was. At its heart was a new H.O. (High-Output) 302-cubic-inch V-8 with 157 horsepower, up a solid 18 horses from the last 302 of 1979. Contributing to this gain was a more aggressive camshaft adapted from a marine version of the long-running V-8, plus a larger two-barrel carburetor, a bigger and smoother exhaust system, a more durable double-row timing chain, and low restriction twin-snorkel air cleaner.

Teamed exclusively with four-speed overdrive manual transmission, it made for the fastest Mustang in years. Claimed 0-60-mph acceleration was below eight seconds, but most magazines clocked closer to seven, and Jim McCraw reported 6.9 seconds in tests at Ford's Dearborn Proving Grounds for the September 1981 Motor Trend.

The reborn GT was not a package but a distinct hatchback model with a top-of-the-line $8308 base price. Effectively, it replaced the Cobra package as a more "adult" enthusiasts' Mustang but retained much of its styling.

"Existing body add-ons are used," noted AutoWeek's George D. Levy, "but with greater discretion than in the past. The spoilers and [hood] scoop are there, for good reason, but the stomach-grabber colors and yahoo graphics are gone, replaced by a few small GT emblems. Exterior colors are limited to [dark red], black, and silver."

Whatever the hue, most exterior chrome went noir, while the grille, headlamp frames, and bumpers were tastefully left in body color. The interior was resolutely black except for cloth seat inserts with jazzy op-art white striping. Bucket seats flanked a standard shift console (still housing a pull-up handbrake as well) but were more heavily bolstered than in lesser models.

A new powerhouse was under the hood for '82 Mustang models. Keep reading to learn about the 1982 Mustang H.O. V-8 engine.