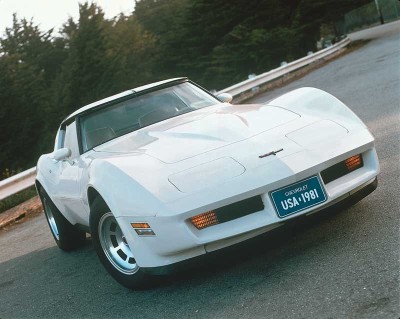 Progressively rising Corporate Average Fuel Economy standards dictated that the Corvette do its bit to help GM's compliance as a whole, so for the 1981 Corvette, the previous pair of 350 V-8s were retired in favor of a single, reworked version, designated L81. With 190 bhp at 4,000 rpm and 280 lbs/ft peak torque at just 1,600 rpm, it had almost exactly the same outputs as the superseded L48. Besides the aforementioned lighter components, it featured an auxiliary electric cooling fan that allowed for a smaller engine-driven fan, thereby reducing noise.

But the big newsmaker was Computer Command Control (CCC). Also adopted for other 1981 GM engines, CCC used electronics to integrate the emissions and fuel systems in order to reduce smog and fuel consumption. Toward the same ends, it tied in with the automatic transmission's new lockup torque-converter clutch. This provided a direct mechanical link between flywheel and propshaft in second and third gears at steady-state speeds, thus eliminating gas-eating frictional losses through the converter.

Changes that were evident to showroom shoppers included a revised interior that now featured a standard quartz clock and optional six-way power driver's seat (that finally reclined), plus electronic tuning for all factory radios. Prices were more eye-catching in a different way: up again, thanks to inflation, the sticker price now starting at a bit over $15,000. Despite a generally dismal year for the industry as a whole, Corvette again showed well in 1981, as sales recovered smartly to 45,631 units.

By far the biggest Corvette news of 1981 was the announced transfer of production from the old St. Louis plant to a brand-new high-tech facility in Bowling Green, Kentucky. However, for two months during the summer of 1981, the cars were built simultaneously in both plants.

A fully up-to-date paint shop was a big plus for the new factory. St. Louis had used lacquer exclusively, but Bowling Green used more automated means to apply more durable enamels as well as the new clearcoat finishes. The Kentucky plant was also planned around much more automated manufacturing hardware than St. Louis could accommodate, reflecting the quest for tighter quality control.

With the opening of the Bowling Green facility, some observers concluded that Chevy was preparing for the arrival of an all-new Corvette. And they would be right. The existence of a new front-engine design was more or less an open secret by then. But testing new machinery and working out assembly procedures made more sense with a familiar design than with a new one, so the C3 would put in one final appearance. It also made sense not to release a new drivetrain at the same time as a new design, so the last C3 was fitted with the revised engine and transmission destined for the C4.

While the new engine was essentially the time-proven 350 V-8, it now came with a newly developed twin throttle-body fuel-injection system instead of a carburetor -- resulting in the first production Corvette "fuelie" since 1965. Dubbed "Cross-Fire Injection," an injector unit within a carb-like throttle body was used for each cylinder bank, while a crossover intake manifold fed the air/fuel mixture to the bank on its opposite side. This speeded up mixture velocity for more complete combustion and hence greater thermal efficiency and power, plus reduced emissions.


Computer Command Control electronics governed the duration of injector opening in response to signals from various engine-mounted sensors. Designated L83, the Cross-Fire 350 recorded 200 bhp at 4,200 rpm and peak torque of 285 lbs/ft at 2,800 rpm, which were modest but satisfying gains over the L81. 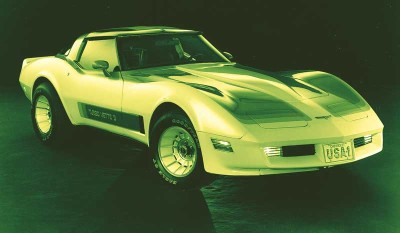