The simple idea behind the 1980 Briggs & Stratton Hybrid concept car was essentially this: If two heads are better than one, why not a car with two power sources?

This unique "best of both worlds" gasoline/electric hybrid was devised around 1980 by Briggs & Stratton, the famous and prolific builder of small engines for everything from washing machines to lawn mowers.

Like so many modern motoring ideas, the Briggs & Stratton Hybrid concept car wasn't entirely new. Electric power had flourished in the early years of "automobiling" before losing out to the internal-combustion engine, which was noisy and emitted noxious fumes but delivered far more power for its size and weight than any battery or electric motor.

The internal-combustion engine also won out for being more "portable" and thus far better suited to automobiles. Electrics have to be recharged, usually quite often, and in early 20th-century America that effectively limited one's driving to urban areas, as widespread rural electrification was still some years off.

Still, several companies combined electric and gasoline propulsion in one vehicle. Krieger in France, for example, built a brougham in 1904 driven by a traction motor operating off batteries that were kept charged by a small gas-run generator.

But these and other efforts were rendered dead ends by technical limitations of the time, plus a seemingly inexhaustible supply of affordable gasoline -- and skies that were still clear.

By the 1960s, though, automobiles had multiplied far beyond what anyone could have imagined in the old days, creating enormous air pollution in cities from Los Angeles to Tokyo. Besides laws to clean up gas engines, the growing vehicle smog problem renewed interest in electric power, which had been relegated over the years to such things as golf carts and small urban delivery trucks.

A further impetus came with the first "energy crisis" of 1973-1974, which showed Americans that the world's fossil fuel resources might not be limitless after all.

With that, Washington stepped up efforts to encourage development of practical power alternatives for cars, awarding lavish cash grants to spur better batteries for a new generation of electrics, I-C engines that could run on fuels other than gasoline, and exploration of various power combinations.

By the mid-1970s, hybrid design loomed as the most technically expedient and cost-effective path to tomorrow's low-pollution high-mileage dream car, and Department of Energy funds prompted all kinds of proposals.

Chrysler and General Electric, for example, teamed up on a $9 million project that culminated in another 1980 prototype called ETV-1. A conventional-looking four-door hatch-back, this carried an 80-horsepower four-cylinder gas engine and a 40-horsepower electric motor that could be used together or separately. The motor ran on 10 car batteries that could be recharged by the gas engine, by braking, or by simply plugging into a wall outlet.

Briggs & Stratton got in on the act by developing the Hybrid concept car in 1980. Learn more about it on the next page.

The Hybrid's six-wheel chassis was borrowed from a small electric van. The extra set of rearmost wheels was need to help support the weight of the batteries mounted above.
©2007 Publications International, Ltd.

Then there was the chassis. Project engineer Bob Harkness, who was also vice-president of B&S research and development, saved time and money with the prototype by starting with a six-wheel platform from a small delivery van made by Marathon Electric Vehicles of Quebec, Canada.

Only the forward pair of rear wheels was driven; the ones behind were a "trailer" for almost 1,000 pounds of batteries, located just below a shallow luggage hold. These 12 batteries powered a small eight-horsepower Baldor electric motor that was coupled to the up-front gas engine via a Borg-Warner "Duo-Cam" automatic clutch. This arrangement allowed the powerplants to be used alone or in tandem (as selected by a simple dash-board knob), but there was no provision for "on-the-fly" charging.

Harkness liked the six-wheeler concept because it allowed a hindmost-wheel design whereby a depleted battery pack could be rolled right out and a freshly charged one rolled in. But besides resolving this and other practical engineering issues, Briggs & Stratton wanted its hybrid to deliver maximum mileage in any power mode without looking like an economy car.

Styling for the 1980 Briggs & Stratton Hybrid was entrusted to Kip Stevens, son of famous Milwaukee-based designer Brooks Stevens of Excalibur fame. The result was indeed stylish despite the inherent awkwardness of the six-wheel chassis.

There was also a rear seat, upholstered to match the fronts, but the slim hard bench afforded scant room because of the bulky battery pack behind and a tidy wheelbase of only 86 inches to the drive axle (a more generous 112 to the third).

Showing electric power was nothing new in the automotive world, Briggs and Stratton posed its Hybrid concept car with an early-1900s electric car.
©2007 Publications International, Ltd.

To help compensate for battery mass, Stevens rendered the body in fire-retardant fiberglass. For the same reason, interior panels were made of light but strong Alucobond laminate, and all "glass" save the windshield was actually DuPont SAR (super-abrasion-resistant) Lucite.

Curb weight thus ended up at a reasonable 3,200 pounds, and Stevens minimized any visual heaviness by finishing the lower third of the body in slimming black, the rest in bright yellow.

But could it move? And move fast? See the next section for details on Hybrid performance. 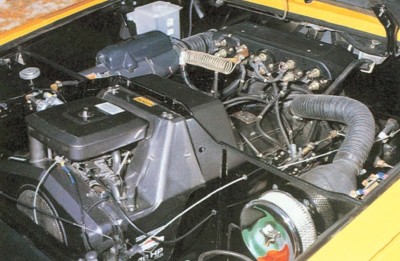