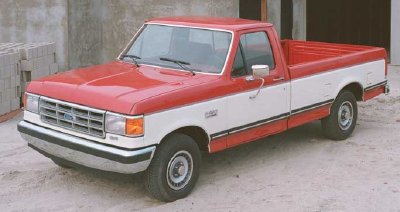 In 1987, Ford's light-duty F-Series trucks and their full-size Bronco companions were treated to a long-awaited restyle, again getting more-aerodynamic front ends. They also got rear-wheel anti-lock brakes, as did the Bronco II. Also in 1987, Henry Ford II, who had taken over and essentially "saved" Ford Motor Company in the 1940s and had run it until 1980, died of pneumonia at the age of 70.

In their first major update since 1980, Ford's F-Series trucks got an aerodynamic restyle for 1987 that featured rounded-off front corners and flush-mounted headlights. The trucks' interiors were also redesigned. The base 4.9-liter six engine gained fuel injection -- and a 25 percent increase in horsepower -- and rear-wheel anti-lock brakes were added as standard equipment.

The 1987 Bronco got the same front-end and interior restyle as the Ford F-Series pickups, along with standard rear-wheel anti-lock brakes and a fuel-injected six-cylinder engine.

The Ford Ranger offered an off-road-flavored High Rider package in 1987 that included a bed-mounted light bar and tubular grille guard.

Representing Ford's 1987 medium-duty truck lineup are (left to right) an L-8000 with set-back front axle, a Cargo, and a Ford F-Series.

Ford's Class-8 conventional truck was the LTL-9000. For 1987, it offered a revised cabin and dashboard, while a dash with added instrumentation was optional. Also new that year were improved Cummins and Caterpillar diesel engines with up to 400 horsepower.

Big news for Ford in 1988 was the AeroMax truck. Find out more on the next page.