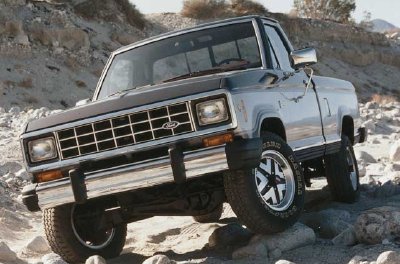 Fuel injection arrived for 1985 Ford trucks, but only on selected engines: the 5.0-liter (302-cubic-inch) V-8 in F-Series and Bronco, and the 2.3-liter four in the Ford Ranger. More Ford truck engines adopted it over the next few years, and all were fuel-injected by the end of the decade.

Newly standard for the 1985 Ranger was a fuel-injected 2.3-liter four-cylinder engine that was more powerful than the carbureted version it replaced. A carbureted 2.8-liter V-6 remained optional, and newly available was a four-speed automatic transmission.

Aside from a five-speed manual transmission replacing a four-speed as standard, and the newly available four-speed automatic as an option, Bronco II saw few changes for 1985. It could look quite ritzy when dressed up with optional decor packages.

Big-brother Bronco got some new dress-up packages for 1985, along with the optional fuel-injected 5.0-liter V-8 offered in the Ford F-Series pickups.

Now looking like something out of a trucking time warp, the tried-and-true C-Series Tilt Cab, which dated from 1957, continued in Ford's lineup -- mostly because it continued to be popular.

The Aerostar minivan and a new medium-duty truck joined Ford's roster in 1986. Continue to the next page for more details.