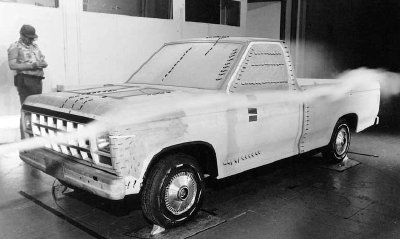 Wind tunnel testing on a Ford truck in 1983

Ford showed even more of a commitment to improved gas mileage in 1983 when the slow-selling Mazda-built Courier truck was replaced by the Ford-built Ranger, which quickly became the most popular compact pickup in the land. Higher GVW Ford F-Series medium-duty trucks also were introduced in 1983.

In an effort to reduce drag, a Ford pickup truck undergoes wind tunnel testing. Because many customers showed increased interest in fuel economy, even trucks were tweaked for maximum efficiency.

Replacing the Mazda-built Courier for 1983 was the Ford-built Ranger truck. Introduced early in the 1982 calendar year, the Ranger was nearly the same size as the Courier and also offered six- and seven-foot beds. Unlike the Courier, however, it was available not only with a regular four-cylinder engine, but also with a V-6 or four-cylinder diesel engine, and -- later in the model year -- with four-wheel drive.

Among F-Series pickups, only the F-350 was available in a four-door, six-passenger crew-cab body style for 1983. All 350s also came with an eight-foot bed, meaning the truck pictured above stretched more than 237 inches -- just shy of 20 feet -- bumper-to-bumper.

New for the 1983 F-Series medium-duty line was a trio of trucks with GVW ratings that edged them into the heavy-duty range. The FT-800 and FT-900 were tandem-axle vehicles with gasoline engines; the FT-8000 (pictured above) was a tandem with a diesel engine.

The Bronco II was born in 1984, but a popular Ford truck model was discontinued. Learn more when you click to the next page.