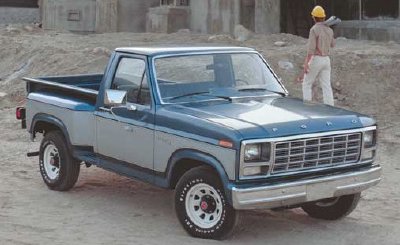 In 1981, all Ford truck lines carried over virtually unchanged, although Ford added the F-100 option with a "downsized" 255-cubic-inch V-8 engine. Smaller than even the standard 300-cubic-inch six, this engine may have been more marketing hype than fuel-economy help, but it showed Ford's commitment to increasing gas mileage.

F-Series Ford trucks had long received an annual styling update -- even if it only amounted to a slight change in the grille -- but that practice ceased with the 1981 models, which were virtually identical to 1980's. By this time, the Ford F-Series was on a roll as the best-selling truck in the land, so there was little incentive to mess with success. Besides, the 1980-81 was a good-looking design, as evidenced by this two-tone F-150 Flareside.

Several custom decor packages were available for light-duty pickups in the early Eighties, one of which included the two-tone paint and white-painted wheels shown here.

Flareside beds, once considered more utilitarian than the smooth-sided Styleside versions, were now considered more stylish. This Ford truck illustrates another example of the custom-decor packages available in 1981.

Introduced for 1976, the LTL-9000 remained Ford's top-line heavy-duty truck in the early Eighties. It came standard with many custom touches -- both inside and out -- and was marked by squared-off grille and fenders that capped an extended-length front end.

The classic Ford lettering across Ford trucks' hoods disappeared in 1982. Click to the next page to see what replaced it.