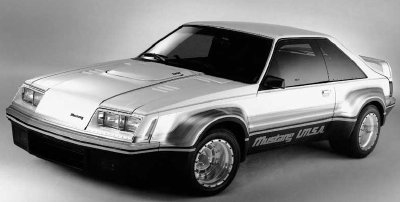 A decade after abandoning motorsports, Ford hinted at an imminent return with the 1980 Mustang IMSA comcept. This one-of-a-kind hatchback looked competition-ready.

Just as the original Mustang enjoyed a high-profile competition career, Ford gave strong indications during 1980 that it was about to get its performance act back together, with Mustang the star of the show. Hinting at what might lie ahead was a tantalizing "concept" attraction for that season's auto-show circuit: the Mustang IMSA.

Powered by a much-modified turbo-four, this buff hatchback crouched low on ultra-wide Pirelli P7 tires hugged by outlandishly flared fenders. Also featured were a grille-less nose, deep front air dam, loop rear spoiler, and competition-inspired pop-riveted plastic covers on the side windows and taillight panel. In name and appearance, the IMSA strongly suggested that Ford was more than just thinking about a return to competition -- and about the International Motor Sports Association GT series in particular.

September 1980 brought more racy news as Ford announced formation of a Special Vehicle Operations (SVO) division headed by Michael Kranefuss, summoned to Dearborn after serving as competition director for Ford Europe. SVO's stated purpose was to "develop a series of limited-production performance cars and develop their image through motorsport."

The new outfit quickly got down to business with a turbo Mustang to be driven by former Porsche pilot Klaus Ludwig in selected 1981 IMSA GT events. Ford also provided direct support to other Mustang racers, backing a Trans-Am mount for Dennis Mecham and an IMSA Kelly American Challenge car for Lyn St. James.

As if to signal its return to the track, Ford introduced the McLaren Mustang in late 1980. The work of designers Todd Gerstenberger and Harry Wykes, it was another heavily modified hatchback with enough built-in potential for easy adaptation to race duty. Looking somewhat like the IMSA show car, the McLaren sported a grille-less nose above a low-riding "skirt" spoiler, plus functional hood scoops, tweaked suspension (mostly a mix of heavy-duty off-the-shelf components), massive fender flares, and premium German BBS alloy wheels wearing broad-shouldered 225/55R15 Firestone HPR radials.

Power was again provided by the turbo-four, but it was newly fortified with a variable boost control having a range of 5-11 psi vs. the regular engine's fixed 5 psi. Rated output was 175 horsepower at 10 psi, a big jump over the 132-horse stock mill. A $25,000 price tag and virtual hand construction limited McLaren production to just 250 units (including the prototype), but at least they were for sale.

Few changes were made to the '81 Mustang, which was well-received overall. Keep reading to learn about the next iteration of the New Breed of Mustang.