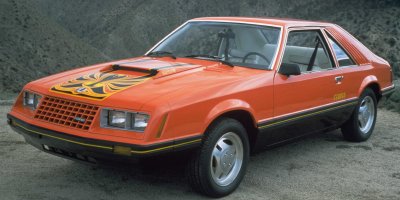 The Cobra package for the 1981 Mustang was nearly identical to the previous year's package, but with a higher price tag.

Changes to the 1981 Ford Mustang were modest. Interior trim was shuffled and slightly upgraded, and an optional T-bar roof with twin lift-off glass panels was revived for both body styles at a hefty $874. The 131-horsepower turbocharged four-cylinder engine was restricted to manual transmission, and then was quietly phased out, reportedly due to persistent driveability and reliability problems. The Cobra package was a near rerun except for a stiffer $1588 price.

Mustang's main '81 news involved full availability of an optional five-speed overdrive manual gearbox for four-cylinder models, an item that had been phased in the previous season. Engineers sensibly specified a "shorter" 3.45:1 final drive versus the four-speed tranny's 3.08:1 cog for better off-the-line snap. The overdrive fifth was geared at 0.82:1 for economical highway cruising.

It was just what the base Mustang needed -- almost. As Consumer Guide noted at the time: "Our biggest objections to the five-speed are its linkage -- stiff, yet vague -- and its shift pattern. As with the four-speed, first through fourth are arranged in the usual H-pattern. But fifth is awkwardly located at the bottom of the dogleg to the right of and opposite fourth, instead of up and to the right.... Why Ford did it this way is a mystery, but it makes getting into or out of fifth real work. Our guess is that the engineers wanted to prevent inexperienced drivers from accidentally engaging overdrive and needlessly lugging the engine, as well as to prevent confusion with the often-used third. If so, they've succeeded admirably."

At the time, one transmission engineer noted that Ford thought most drivers would want to downshift from fifth directly to third, bypassing fourth. A more logical reason was that putting fifth over-and-up would have entailed excessively long arm reach. The "official" explanation was that the U-shaped shift motion better emphasized the economy benefits of the long-striding fifth gear. Whatever the reason, it just didn't work.

An optional T-bar roof with twin lift-off panels had been offered on late Mustang IIs, but the "New Breed" did without one until 1981.

Overall, though, the "New Breed" worked beautifully, another Mustang just right for its time. But the turn of the Eighties was another unhappy time for car lovers of every persuasion, and the future promised to be no better as far as anyone could see.

It was in this dour atmosphere that Motor Trend picked Mustang to kick off a series of nostalgic "Now Vs. Then" comparisons in its November 1980 issue. After driving a modestly optioned V-8 notchback against a classic hardtop of similar spec, writer Tony Swan concluded on a wistful note: "Mustang '66 is one of those automotive immortals that's earned a special niche. It is a car of distinctive character…produced in a manufacturing community blithely free of today's frequently conflicting regulations.

"Mustang '80," Swan continued, "is also a car of distinctive character, an achievement made more remarkable in view of [those] regulations…. [It's] contemporary in every sense and perhaps suffers from this in contrast to its ancestor. In an age of behemoths and excess, it wasn't particularly difficult for something as trim as the original Mustang to stand out from the crowd. But in the age of the Big Shrink, it is much more difficult for a designer to achieve something truly striking. Thus, we are comparing not only two cars but two eras. On a straight point-for-point comparison, each contender scores…. But in the perspective of today's world, the 1966 Mustang is an anachronism -- a collector's item. Of course they don't build 'em like they used to. [E]ven if they wanted to…there's this problem: They're not allowed to."

Maybe not, but that didn't rule out building 'em better -- which is exactly what would happen. More immediately, performance was about to make a surprise comeback in embattled Detroit. Not surprisingly, Mustang would lead the charge.