The Redesign of the Vector 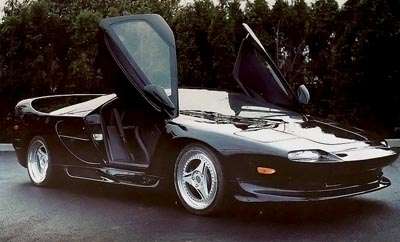 The new owners of Vector also purchased Lamborghini and adopted its V-12 for use in a new Vector series. The M12 was first shown in 1996.

In the 22 years from the initial concept to the final Vector W8 that rolled from the factory, only 22 Vectors had been built. Buyers included a Texas millionaire, a Southern California real estate investor, a Japanese car collector, and former National Automobile Dealers Association president Ron Tonkin.

With the four unfinished W8 models sitting on the factory floor and orders for the new model in hand, business plans were reorganized. Included in the company's new direction were plans to reengineer the car for export sales.

To separate the new management from the old regime, the car had to be renamed. The visually stunning Avtech WX-3 became the Avtech Super Coupe, or Avtech SC, but Wiegert even laid claim to the Avtech name.

The company redesigned the car. The all-American supercar would now be powered by an engine from MegaTech's Lamborghini. It was less expensive to use the stock Italian powerplant than to design modifications to upgrade an American engine and meet emissions regulations.

Robert Braner, vice-president of marketing since 1990, became president and CEO after Wiegert's dismissal. The company relocated to Centurion Parkway in Jacksonville, Florida, where corporate cousin Lamborghini USA was based. Production moved to a closed Navy air base in Green Cove Springs, 25 miles from Jacksonville.

In the 1997 model year, 200 Vectors were to be produced. In April 1995, Braner left Vector to concentrate on his new position as president of Lamborghini USA. David Peter Rose was appointed to head the corporation.

The development of the new model, which had begun in the summer of 1991, stretched to the end of 1995. The new Vector model made its first public appearance at Detroit's North American

International Auto Show in January 1996. Now called the M12, two of the super-cars were on display. A redesigned exterior covered a virtually all-new car.

The new design corrected a few serious flaws in the car. After placing a WX-3 in a wind tunnel, it was found to be aerodynamically sound, but would have left the engine starved for air. Much of the aero-space engineering was replaced by more production-oriented equipment.

"We kept the air conditioner and a front cross beam from the original car. That's it," Rose told Car and Driver.

Go on to the next page to learn about second generation Vectors.