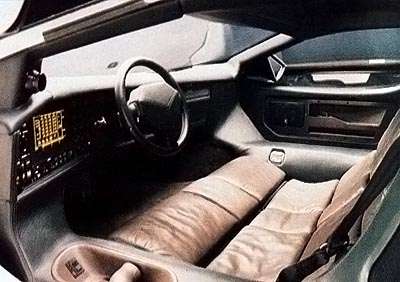 Inside the Avtech WX-3, the aircraft-inspired dash and left-hand gearshift remained, but a sloping three-passenger bench seat replaced buckets.

The 1992 New York Auto Show was the occasion for the introduction of the next Vector. The Avtech WX-3 was claimed to be powered by engines up to 1,000 bhp. The price was announced to be $765,000. (Wiegert later claimed a $200,000 normally-aspirated model powered by a 300-horse engine based on the Chevrolet Corvette LT1 V-8 was to have followed.)

Meanwhile, Wiegert succumbed to pressure and reneged on his American-only financing philosophy later that same year. He teamed up with Indonesian-backed, Bermuda-based MegaTech Ltd. and the Sedtco Pty an Indonesia-based shipping, mining, and manufacturing conglomerate. The Indonesian financiers created V Tower Corporation as the holding company for their foreign automotive interests.

MegaTech was headed by Setiawan Djody and Hutomo "Tommy" Suharto. Djody a self-made millionaire, wanted to be Indonesia's first automotive tycoon. Suharto was a racing-car enthusiast and the son of Indonesia's premier. (Later, the two organized the $40 million purchase of Lamborghini for its racing, production, and engineering programs.)

This newfound cash helped Wiegert and his engineers further develop the car. This work led to the development of a V-12 engine.

The Ryan Falconer-designed and built engine employed much of the basic structure of the ubiquitous Chevrolet 350 V-8 that Vector had used for 15 years. But while pictures and details were published, no running Vector was ever displayed with the engine.

Wiegert arrived at the 1993 Geneva Auto Show to find that the previous year's fees to show the Vector had not been paid. He paid the outstanding amount of $20,000 on his American Express card so that his cars would not be impounded. He displayed the Avtech WX-3 coupe and roadster at the 1993 show.

Updated versions of the W8, the new cars featured more modern, less angular styling, but continued to sport the Vector trademark scissor-action doors. These cars were offered at a price of less than $200,000 for the coupe and about $250,000 for a top-of-the-line roadster. It was announced, at this time, that the W8 was being phased out immediately.

The WX-3 was to be available with a number of powertrain choices. A transverse-mounted 6.0-liter V-8 featured two turbochargers. Optional engines were to include versions producing between 500 and 1200 bhp, including a 7.0-liter dohc 32-valve edition.

Although the 32-valve engine degrees -- estimated to be a $100,000 option degrees -- was mentioned in a number of car magazines, only a brief glimpse was ever shown in the sales literature.

Features for the Avtech remained in tune with Wiegert's idea of using nothing but the best that America could supply Based on the Oldsmobile Toronado three-speed unit, the Avtech transaxle used components designed and built exclusively for the Vector.

Enormous 13.5-inch ventilated disc brakes were used at all four corners. A three-passenger bench seat was used for the prototype, although the production model was expected to use two bucket seats.

Go on to the next page to read about trouble with the Vector.