Publicity for the Vector 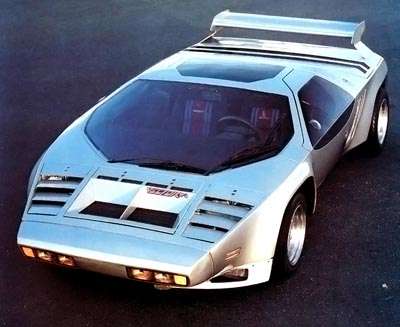 The Vector made its public appearances in a variety of colors.

Following the Car and Driver coming-out for the Vector W2, other magazines from all around the world joined the Vector parade. Publicity for the car attempted to keep financial backing coming in to the company, with no imminent signs of production cars.

By 1984, Wiegert had reorganized his company to mount another media blitz. "Vector: The World's Fastest Investment" headed a brochure advertising the company's product and need for capital.

In addition to the information quoted in the literature for the "production" car, the brochure carried an order form advertising Vector merchandise for sale: T-shirts, polo shirts, and flight jackets all included Vector logos. For product information, videotapes, posters, and three information packages ranging from $15 to $75 were available.

Still, the monetary problems continued. Vector Cars International (the company's new name) allowed the car to be hired for photo opportunities to increase its exposure and raise desperately needed cash.

As a result, the Vector was seen in advertising for Timex watches, Midas mufflers. Chevron oil, and Vantage cigarettes. It was also featured in the Tommy Lee Jones movie Black Moon Rising.

In 1987, Wiegert once again reorganized the company, this time as Vector Aeromotive Corporation. Now on North Marine Avenue in Wilmington, California, the organization seemed poised to actually build cars for sale.

AutoWeek magazine covered the Vector in an eight-page cover story. The piece used rave quotes from Art Center College of Design teacher Strother McMinn to describe Wiegert ("he has shown a kaleidoscopic arrangement of talents including sensitivity skill and he's somewhat of a businessman") and his car ("as a machine itself, [the Vector] has great potential.").

However, author Dutch Mandel compared the plant to Peter Pan's Neverland and Wiegert himself to P T. Barnum. Mandel summed up by stating that the Vector was "a long way from production."

Following the AutoWeek article, Wiegert and Vector filed a $5 million lawsuit for libel. The suit was unsuccessful, but it set a pattern for a number of cases that wound up helping to finance the Vector cause. Other actions included suits against R. J. Reynolds (unsatisfactory use of the Vector in cigarette advertising) and Goodyear (trademark infringement with their Vector tire).

On the next page, you will learn about the Vector W8.