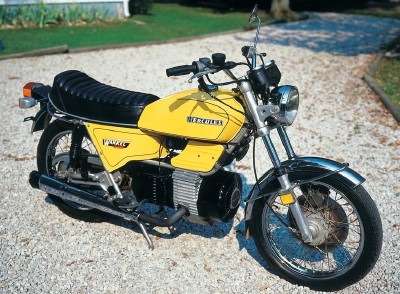 The 1976 Hercules W2000 motorcycle was the first commercially built bike with a rotary engine. The Hercules W2000 ran a Sachs 292-cc, single-rotor Wankel.

Looking back over the history of motorcycling, it's evident that a wide variety of powerplants have been used. From the very first steam-powered units to the multivalve electronic wonders of today, there was very little that wasn't attempted.

Hercules started building motorcycles in 1904 and, for many years, designed its own chassis but used proprietary engines. This policy continued until 1966, when the company was merged with DKW under Fichel & Sachs Company.

Afterward, the Hercules name typically adorned mopeds. But something really new was on the horizon.

In an effort to combine efficiency and smooth power delivery, a rotary engine was slipped into a Hercules frame.

The prototype W2000 had its Wankel engine mated to a BMW gearbox with shaft drive, but production versions got a different transmission with six speeds and were chain-driven.

While the Wankel was indeed a silky powerplant, it generated excess heat, and the W2000 was never sold in great numbers.

Another Wankel-powered motorcycle was made by Suzuki in the mid-1970s. Featuring a water-cooled 500-cc single-rotor Wankel, the RE-5 proved to be unreliable, and it too was quickly discontinued.

Go to the next page to see more pictures of the 1976 Hercules W2000 motorcycle and the Suzuki RE-5. 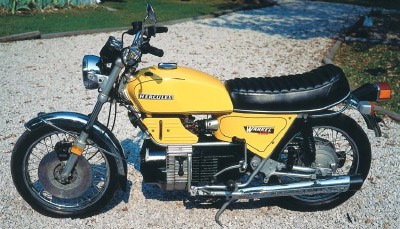 The W2000 was powered by a single-rotor Wankel.

The Sachs rotary carried a large fan up front.
The Wankel's chief problem was overheating.
Despite its unorthodox power source, the 1976 Hercules W2000 used conventional gauges.
Suzuki released its own rotary-powered bike about the same time as Hercules, but the Suzuki RE-5, shown, had a larger-displacement Wankel of about 500 cc.