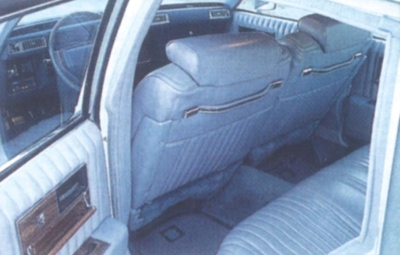 The 1976 Cadillac Seville styling pioneered what came to be called the "sheer look," which turned out to be highly influential both within General Motors and throughout the industry. The term hinted at sheer stockings on a woman's legs: a smoothly filled, neatly packaged surface. It also took meaning from the sheer face of a cliff, as seen in the car's steep drops over fenders, grille and roof.

The Seville was designed to appeal to younger but conservative luxury-car buyers, so ornamental brightwork was limited to wheelcovers, rocker moldings and bumper strips. Early cars were even sold only with medium gray paint and gray leather upholstery. Like Mercedes and BMW, the new little Cadillac wore very little "jewelry" inside or out.

A padded vinyl roof was standard, however -- and had to be. This was because Fisher Body took the forward portion of the X-car roof stamping and simply welded on the Seville's unique sail panels and vertical backlight. There was no easy way to hide the welds except to cover them, so that's what Fisher did.

Overall, the 1976 Seville looked nothing like the inexpensive Nova. Its styling won a number of awards soon after the car's debut. Among them were Fortune magazine's designation as one of the 25 best-designed products in the U.S. and the Parsons School's prize as one of the 10 most beautiful automobile designs of the previous half-century.

The squarish, uncluttered sheer look appeared next on GM's downsized 1977 full-size cars, among them the Chevrolet Caprice and Impala, as well as Cadillac's own DeVilles. It also turned up at Ford on everything from the Fairmont to the Continental, and at Chrysler in the 1979 New Yorker/Dodge St. Regis, which were unabashed copies of the Seville.

The Seville ended up 27 inches shorter than a 1975 Sedan de Ville, eight inches narrower, and nearly 1,000 pounds lighter. Even at that, it still weighed 4,341 pounds. Some of that weight came from sound deadening and extensive rustproofing. The cowl, both rear quarters, the wheelhouses, and all door outers used Zincrometal-steel coated with zinc on the inside. Inner and outer rocker-panel surfaces were fully galvanized, as were most rear-end sheetmetal stampings, and hot wax was sprayed into all hidden body cavities.

On the next page, find details about the 1976 Cadillac Seville's features and specifications.