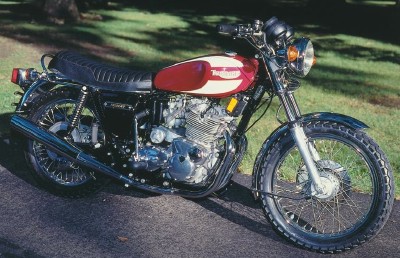 The 1975 Triumph Trident was updated to appeal to American tastes and laws, but its three-cylinder design would be dropped after 1976. See more motorcycle pictures.

The 1975 Triumph Trident motorcycle held fast to Triumph's three-cylinder tradition, but ultimately succumbed because it was costlier than the more popular Triumph Bonneville, and slower than the incoming tide of Japanese superbikes.

The Triumph T150 Trident and BSA Rocket 3 were introduced in the States during the summer of 1968 as an attempt to fend off the attack of Japanese exports to the lucrative U.S. market.

Despite the fact that the two companies had joined forces in 1951 and the motorcycles themselves were similar in specification, the Trident and Rocket 3 differed in many respects.

Styling was unique to each, and even the engines were slightly different: the Trident had vertically mounted cylinders, while those on the Rocket 3 were canted forward a bit.

While both were considered decent motorcycles that challenged the best in terms of performance, their strengths paled with the introduction of Honda's 750 Four a few months later.

Both British bikes received minor updates in subsequent years, but the Rocket 3 dropped out of the picture in 1973 (along with BSA itself), while the Trident got an overhaul.

The revised Trident, called the T160, carried several new features. The most obvious change was the adoption of inclined cylinders that allowed for a slightly lower profile. The engine also was fitted with more durable internal hardware and gained an electric starter.

To appeal to American tastes (and laws), the shift lever was moved to the left side of the bike. A 10-inch disc brake finally appeared up front to replace the antiquated drum.

Unfortunately for Triumph, the superbike ante had been raised by the likes of Kawasaki's new Z-1, and though certainly improved, the Trident just didn't measure up.

Furthermore, the displacement of its Bonneville twin-cylinder sibling had been increased to the same 750 ccs in 1973, and few buyers could justify the Trident's higher price.

As a result, Triumph's triple faded from the scene after 1976, though the name was revived in 1990 for a more modern, water-cooled, three-cylinder machine to be produced by a new Triumph corporation.

Go to the next page for more pictures of the 1975 Triumph Trident motorcycle. 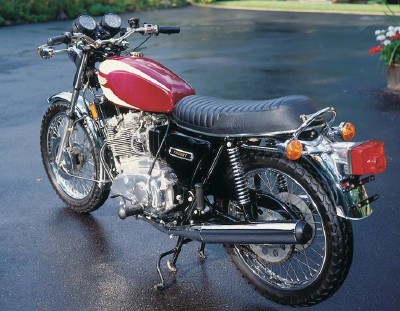 The center exhaust port was split, allowing the center pipe to join with each of the outer ones, and each pair then routed to its own muffler.

The 1975 Triumph Trident motorcycle benefited from some subtle changes made during the 1970s. For example, the shift lever was moved to the left of the bike in effort to broaden its appeal in the U.S. market.

This second-generation Triumph triple was updated with an electric starter and cylinders that went from vertical to slightly inclined.
The 1975 Triumph Trident had a left-side shifter to comply with U.S. motorcycle regulations.
The Triumph name has never really lost its appeal.
The X-75, designed by Craig Vetter of fairing fame, was a styling exercise based on the Trident. It was sold through Triumph dealers and is quite collectible.