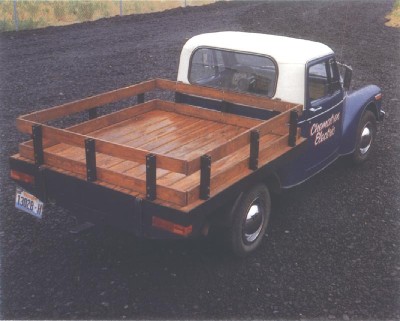 This is one of three 1975 Leata trucks built.
2007 Publications International Ltd.

Considering the 1975 Leata's debut, one would think that the Leata had plenty of selling points for an aggressive ad campaign: The cute little car that's storming its way into the hearts of America, or some such. But the inventor felt that word of mouth would keep his production line working at maximum capacity. Since that was very small, he was just about right. Whenever Stinebaugh felt the Leata needed promotion, he'd manage to get an article placed in the popular press.

On March 23, 1975, Leata graced the cover of the Spokane Spokesman-Review's Sunday magazine section. The accompanying article had a bit of gee-whiz about it, referring to the Leata as Stinebaugh's "unique invention." It gushed about an engine "designed especially for the car," delivering 50 mpg and a top speed of over 100. Further, the "very simple task" of replacing the front wheels with skis would convert the car into a snowmobile; switching the regular tires to "balloon tires" created a dune buggy.

In fairness to the reporter, it must be said that Stinebaugh was nothing if not loquacious, and his conversation hopped nimbly from subject to subject. It sounded as if facts regarding the Leata were well shuffled with those of the original ATV.

This wonder machine was to sell for under $3,000 and see a production rate of one car per day. With a waiting list of "over 1,000," Stinebaugh Manufacturing appeared to be set for nearly three years, without having to do any advertising.

Since each car was virtually hand-built, the Stinebaughs were able to experiment with variations on the basic theme. Photographs showed the Leata incarnated as a convertible, a coupe, and a pickup truck on a Pinto-size 94-inch wheelbase. One slightly stretched version of the coupe was also made, a so-called "sedan" fitted with a thin foam pad on the floor behind the bucket seats.

Another bit of gratis publicity appeared on April 26, 1976, in Midnight, a grocery store tabloid. By this time, the product line had shaken down to the coupe and pickup, the price upped to "less than $3,500," with a waiting list given as 2,000. Stinebaugh Manufacturing had also acquired a sales manager, Gary Gockley, who was quoted as saying, "Really, we've had fantastic luck with the thing. We haven't had any trouble at all with the ratio and weights and all those different kinds of problems," great enlightenment indeed for the mechanically inclined. He noted further that since the "basic research and development" was done, a production goal of 10 cars per day was in sight.

Ironically, by the time Midnight hit the checkout lanes, the Leata had died. Although some cars were built in early 1976, all were registered as 1975 models. Production had never reached a car a week, much less 10 a day. Apparently, 22 Leatas were produced, all coupes save for one convertible, three trucks, and the lone sedan. After that, the body molds and parts inventory were sold off, sounding the knell for another anomalous American automobile.

Continue to the next page to learn about the cars that came after the Leata.